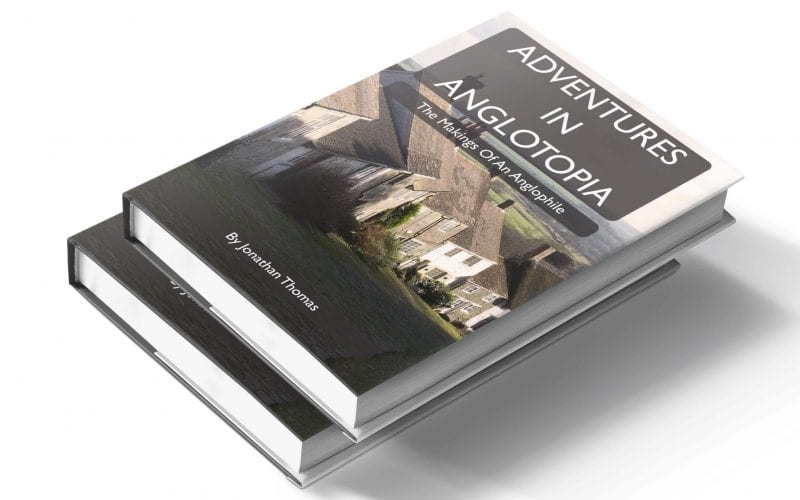 First, a quick note to say thank you to everyone who has pre-ordered my book since I announced it on May 1st. The response has completely exceeded my expectations and the book is a big success personally and with sales. I hope we can keep the train moving as we get nearer the release date.

A few have been asking, so – what’s my book about? Beyond the stock synopsis – I thought it would be fun to give you an insight into what each chapter is about. When I was putting together the book proposal to shop around to agents and publishers, I needed to summarize each chapter. It was a useful exercise and it’s also representative of what the book is about. Each chapter in Adventures in Anglotopia is basically a short little essay on one aspect of Britishness or my relationship with Britain over the years. The chapters vary in length – none are longer than 5,000 words, most are around 1,000-2,000 words. I didn’t want the book to be a chore to read. As we get nearer to the release date, I will release a few select chapters as excerpts.

At the bottom of the post, I’ll put the links to all the places where you can buy the book. But I’d like to encourage you to buy the book directly from us in our online store. Your copy will come signed and if you leave a note at checkout, I can personalize the inscription.

This is where I introduce the main thesis of the book – exploring why I’m such an Anglophile. A couple of stories are told that were important in my formative years as an Anglophile. One relates to the film The Empire of the Sun and the writings of Roald Dahl.

When I visited London for the first time, I hated it. This was a problem as an Anglophile. I explain why London didn’t live up to my expectations, but come to terms with it by the end.

Notes from a Wiltshire Pub

I explore Britain’s culture of the Pub by vaguely describing our favorite pub to visit when we’re in Britain. However, I never give the location away.

Finding a Hometown in England

I have a special relationship with the town of Shaftesbury, Dorset – site of Gold Hill, made famous by Ridley Scott in the Hovis Bread commercial. In this chapter, I explain why it’s such a special place and why we return at least once a year.

The County Without a Motorway

In addition to Shaftesbury, the county of Dorset is very special, and this chapter explains why, through stories of our journeys there across the years.

One of the things I love most about Britain is the right to roam, something we do not have here in the USA. In this chapter, I explore how Britain developed this right and how we can benefit from it.

This chapter focuses on Oxford and why it’s a special place for me, through the lens of my various visits over the years along with a stay as a temporary student.

I love driving in the UK whenever we’re there. This chapter is a tribute to driving on the confusing, stressful and slow British road network. It’s driving paradise.

Mentioning Winston Churchill seems to create endless controversy now. This chapter focuses on why that should not be the case. Based on political persuasion alone, I should not be a Churchillian, but this chapter explains why I am.

We were very lucky a few years ago to spend our first English Christmas in a cottage located on Gold Hill in Shaftesbury, Dorset. It was a panoply of experiences we’d never had before, and this chapter explains the most interesting aspects of English Christmas.

The London Black Taxi is an icon all over the world, and in this chapter, I explore the history and heritage of the Black Cab through my own experiences.

In this chapter, I describe my perfect cottage and talk about how important the concept of a cozy cottage is to the English and how foreigners perceive the countryside of Britain.

I work from home every day, except when I have to travel to Britain for research. That’s when I really actually go to work – and it’s a 4,000-mile commute. This chapter is a meditation on transatlantic travel through history through the lens of recent experiences.

Ordnance Survey maps are beautiful objects of British design that can guide you to anywhere in Britain. They’re almost completely unknown here because America doesn’t have an equivalent. This chapter explores their history and how to make use of them.

Britain is filled with heritage Steam Railways that are separate from Britain’s rail network; often tourist attractions run by volunteers. You can’t go anywhere on them, but they’re wonderful celebrations of Britain’s railway and industrial heritage. This chapter explains why they exist along with visits on my own to several of my favorites.

Tea is the most associated stereotype with Britain, and in this chapter, I explore how important tea is to the British, along with several of my own experiences with the titular drink.

When you travel to the UK, you realize that the English have a completely different concept of life and how to spend their lives. This chapter explores exactly what ‘English Time’ is.

To truly understand Britain, you need to understand its art and how it’s shaped Britain’s perception of itself. This chapter focuses on several of the big names in British art and how they have affected me personally.

This chapter explores Britain’s #1 cultural export: its television. I delve into my past and write about the first British TV shows I was exposed to and how that evolved into my Anglophilia today.

Britain has a beautiful landscape, but more often than not, writers and poets focus on the landscape itself, not the people in it. I learned recently that there is so much more to the landscape than just how it looks. Every element of how it looks has been shaped by man and the people who inhabit it.

As a fan of classical music, I was delighted to learn how important Classical Music is in Britain compared to the US – they even have a national radio station dedicated to it. This chapter is about my experiences with classical music while traveling in Britain.

The Boy Who Lived and Lived

The Harry Potter franchise has turned more young American children into Anglophiles than anything in recent years. In this chapter, I write about my own experiences with Harry Potter and how it shaped my Anglophilia.

We live in a noisy world and where I live currently, is very noisy. This chapter is a celebration of how quiet England tends to be – especially in the countryside. English silence is a great cure for whatever ails you.

A Love Letter to the Tube

The London Underground has a particular romance about it, and it’s often the first experience people have of London when they visit. This chapter takes you on a hypothetical journey from Heathrow into central London, with interesting observations along the way.

Britain is filled with interesting small museums, on the surface at least. This chapter explores how they can be maddening places to visit. But also wonderful.

Tut-tutting and Taking the Piss

This chapter explores two aspects of English culture that may be the most incomprehensible to outsiders – tut-tutting and the tearing down of someone too thick to realize they are being taken down. The first part talks about how we’ve begun to internalize tut-tutting in our travels around Britain. The second part talks about the first time I met British people as a child, and how they were merciless in making fun of us ignorant American kids.

English Summers are Better Than All Other Possible Summers

Over the years, I’ve had the chance to spend quite a bit of time in England during the summer, and it’s been wonderful, even when it’s pouring down rain.

The Age of Things

Britain is one of the oldest countries in the world, and as a consequence, there is an appreciation for historical buildings, landscapes and places that is almost completely absent in the USA. This chapter focuses on the loss of a local historical building in Indiana and compares it to how Britain treats such places.

Until I visited the Lake District, I had no idea what I had been missing out on. This chapter explores several interesting experiences I had in the Lake District along with observations about the place, focusing on the charming hotel I stayed in.

When many Americans think of Britain now, they think of stately homes and Downton Abbey. This chapter focuses on them by using a rhetorical device to describe an average visit to one of Britain’s stately homes, by compositing many different places into one.

The Queen and All That

This chapter is dedicated to the Queen and how Anglophiles see her in the world. Many of my memories of the Queen start with Princess Diana’s death.

Finding My Roots in Durham

After some family research, I found out that I had roots in Durham. In this chapter, I set out to explore the real places my ancestors lived in before they immigrated to America in the 19th century.

Why Don’t You Just Move Here?

I get asked often if I love Britain so much, why don’t I just move there? The answer is complicated – but I have tried to move to Britain several times, at one point starting the visa application process. This chapter explains why I haven’t yet, but with optimism for the future.

A Love of Englishness

A chapter that begins to summarize all the things I love about England and Britain as we approach the final, valedictory chapter.

This chapter is the culmination of the entire book, where I set out my ‘British Dream.’ This encompasses moving there and living in a cottage in the countryside.

Where to Buy Adventures in Anglotopia