After a seemingly endless wait, the Doctor is back!

The first adventure of the new season is a glorious homage to all things James Bond. Entitled Spyfall, season 12’s opener, the first of two-parts, promises to pick up where Resolution left off in terms of pacing and style. However, despite the spy shenanigans, there’s a lot of other interesting things going on to feed the tension.

This speculation is based around recent comments by the cast to The Radio Times about a much rumored as a controversial cliffhanger. With so much information being kept under wraps, Spyfall appears to be an all-out thrill ride with plenty of substance for fans to chew on. 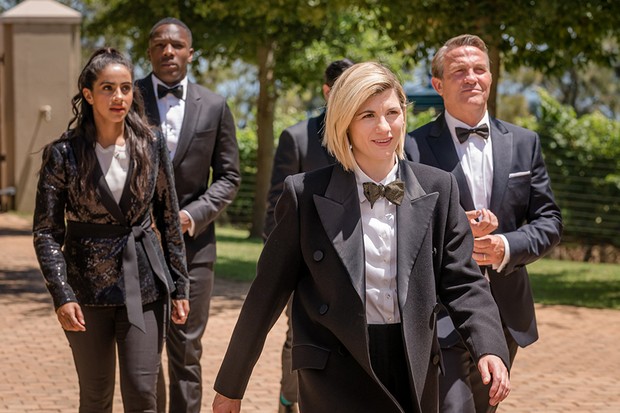 In a season boasting the return of Cybermen, Kate Stewart and the Jadoon, Spyfall appears likely to take viewers for a kinetic ride. There’s big parties, nice clothes, dangerous new aliens and a greedy, prototypical Bond-esque baddie. There’s also loads of spies and some frustration by the friends and family of Graham, Yaz and Ryan about what exactly they have been up to. 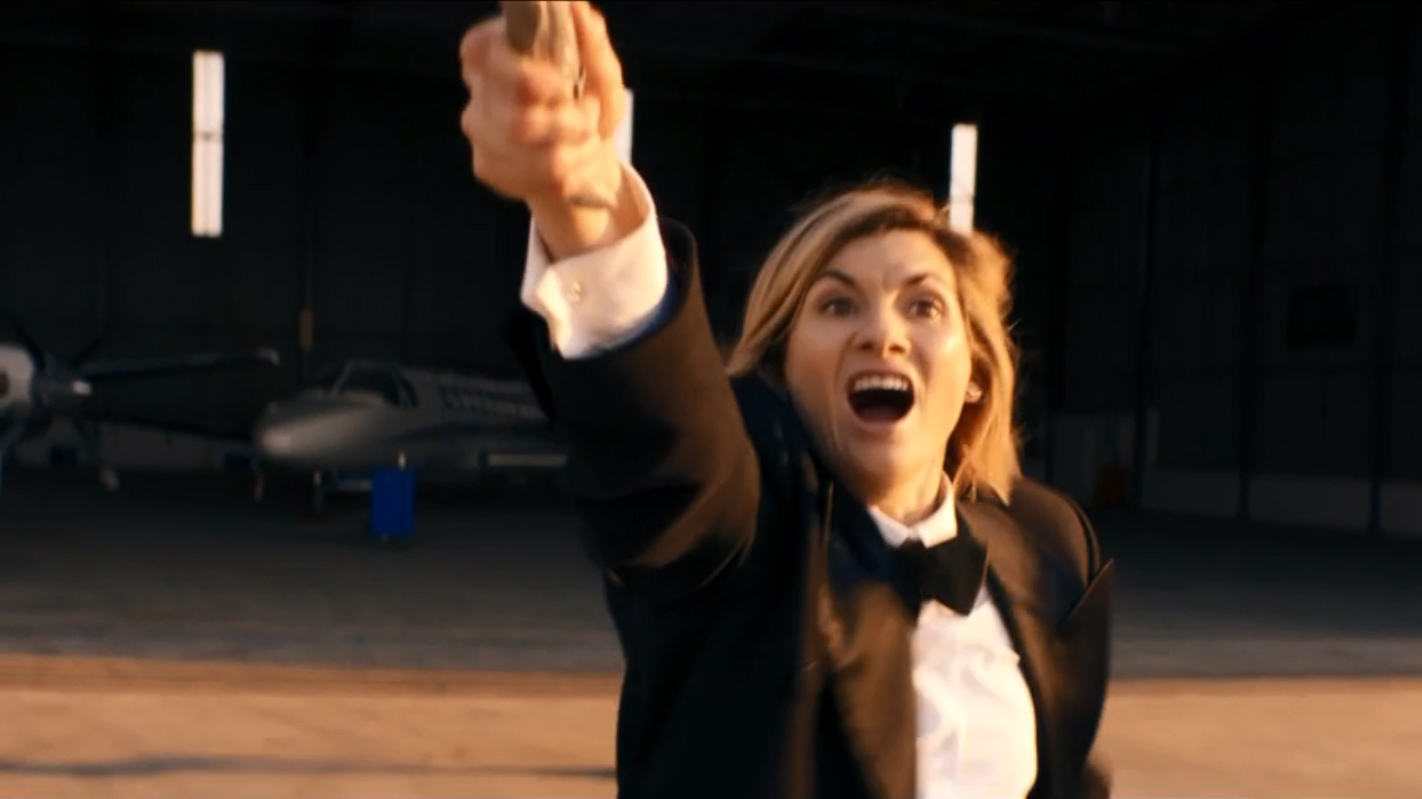 Then there’s the Doctor. Still mysterious, vague and curious. It will indeed be interesting to see where Whittaker and Chibnall take things in the new season.

Both episodes are written by Chris Chibnall. Episode One is directed by Jamie Magnus Stone, who is directing the series for the first time.

The episode also allows some breathing room for each of the principals by splitting them up. This allows separate plot lines to develop and allows the companions to have more character development. For example, Yaz and Ryan are given cover identities as Sofia Afzal and Logan Jackson, two journalists assigned to profile a suspicious mogul named David Barton.

Not only does Jodie Whittaker get a new outfit, but she also gets an opportunity to allow her version of the Doctor to grow more into her own vision of the character. Traditionally the second season for an actor in the role means they can tweak the character and put their own stamp on how they interpret the Doctor. It should be interesting to see where Whittaker takes the part next particularly since it appears as though their season will be faster in pacing and tempo than her first series.

Intelligence agents around the world are under attack from alien forces, so MI6 turns to the only people who can help, The Doctor and friends. As the team travels the globe looking for answers, attacks come from all sides. Earth’s security rests on their shoulders, but where will this planet-threatening conspiracy lead them?

A Little Bit of Fry and Henry

Stephen Fry is guest-starring as “C,” a savvy veteran of espionage who calls on the Doctor for help. Alongside Fry is Lenny Henry as the apparent villain of the piece, Daniel Barton. 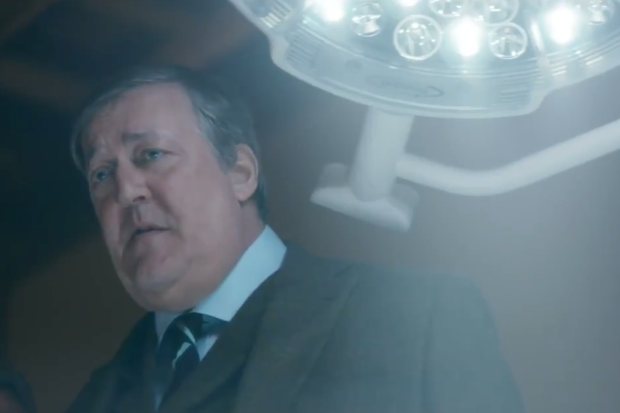 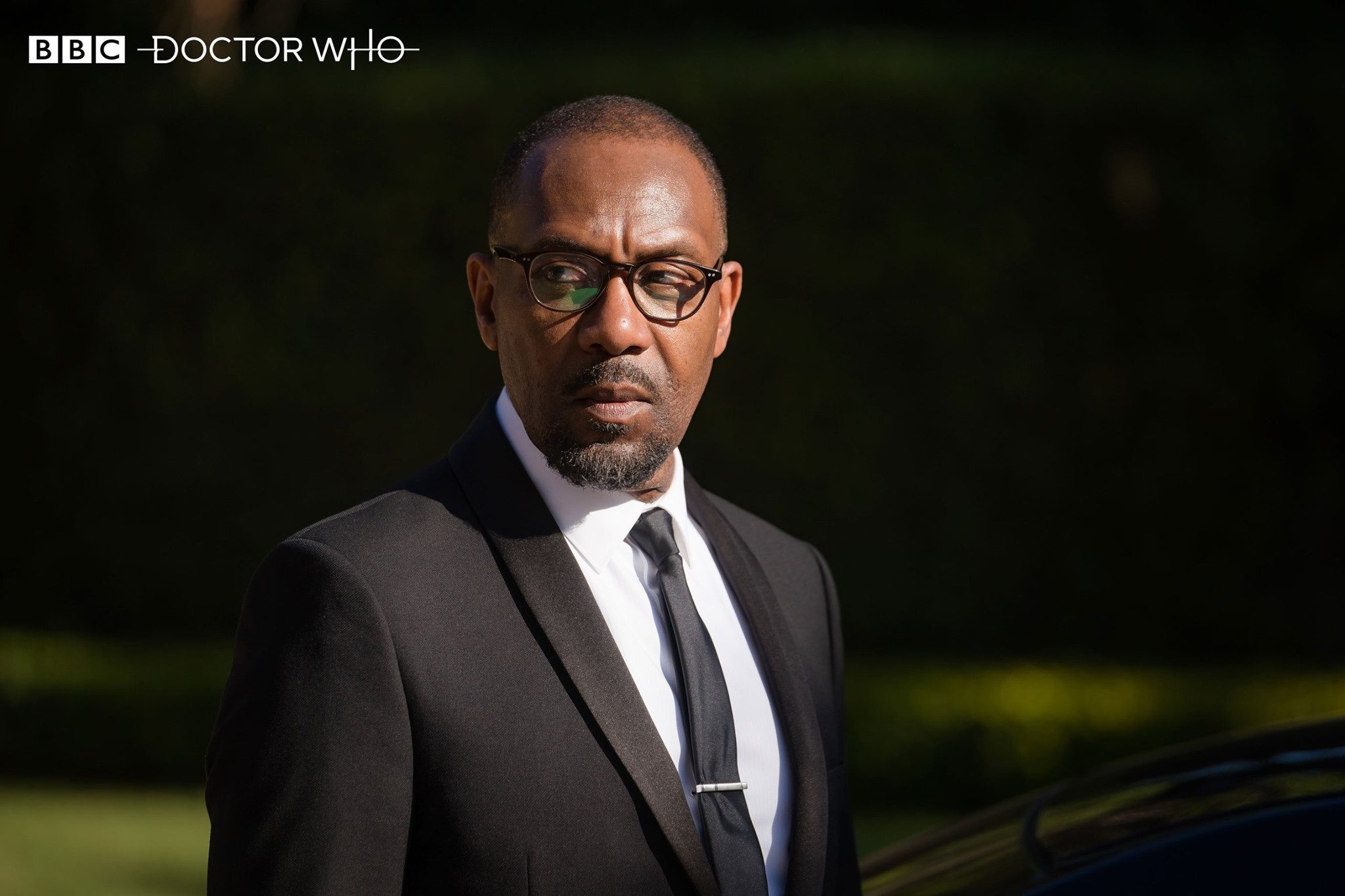 Early indications are that Barton is rich, paranoid, careful and hiding something.

Amongst the changes being made this year are a new TARDIS interior which features a new crystalline-like extension running from the ceiling to the console. 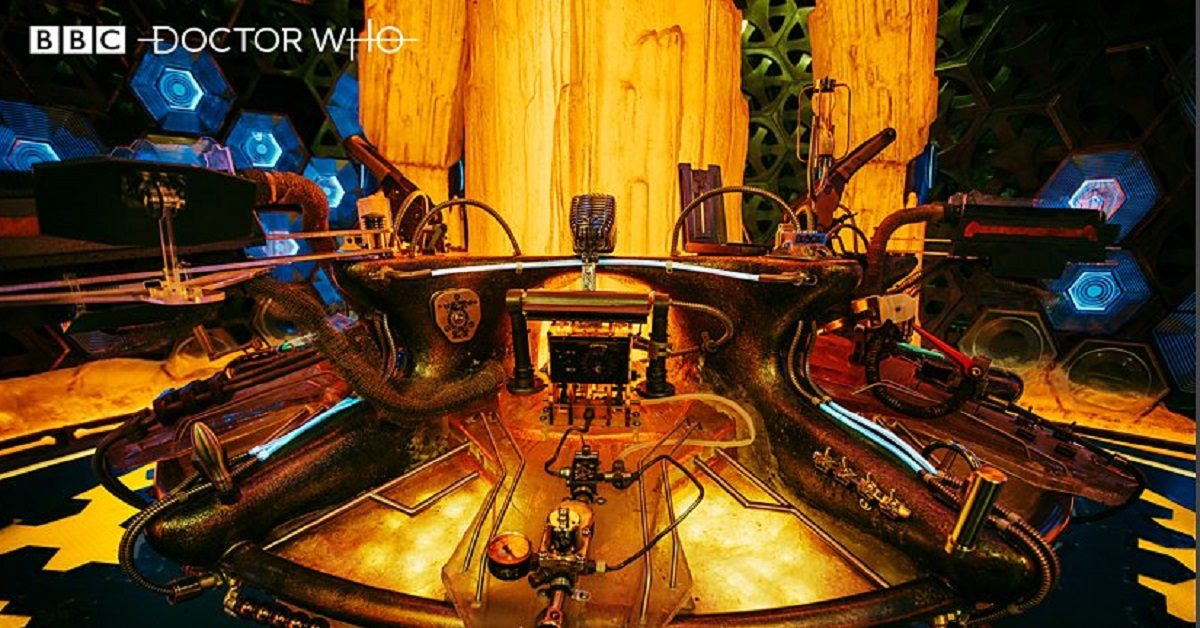 Another platformed tier with hexagonal railings has also been added to the set.

Showrunner Chris Chibnall spoke with The Radio Times about season 12’s opening story. “We always knew last year would be those 10 standalone stories, and this year we wanted to weave things in a bit more.” He added, “Obviously, even though we didn’t officially do two-parters last year, you could argue that first one [The Woman Who Fell to Earth] has a cliffhanger into the second. A two-parter that wasn’t a two-parter!”

Here are some preview clips for the season premiere.

Here are some publicity photos from Spyfall. 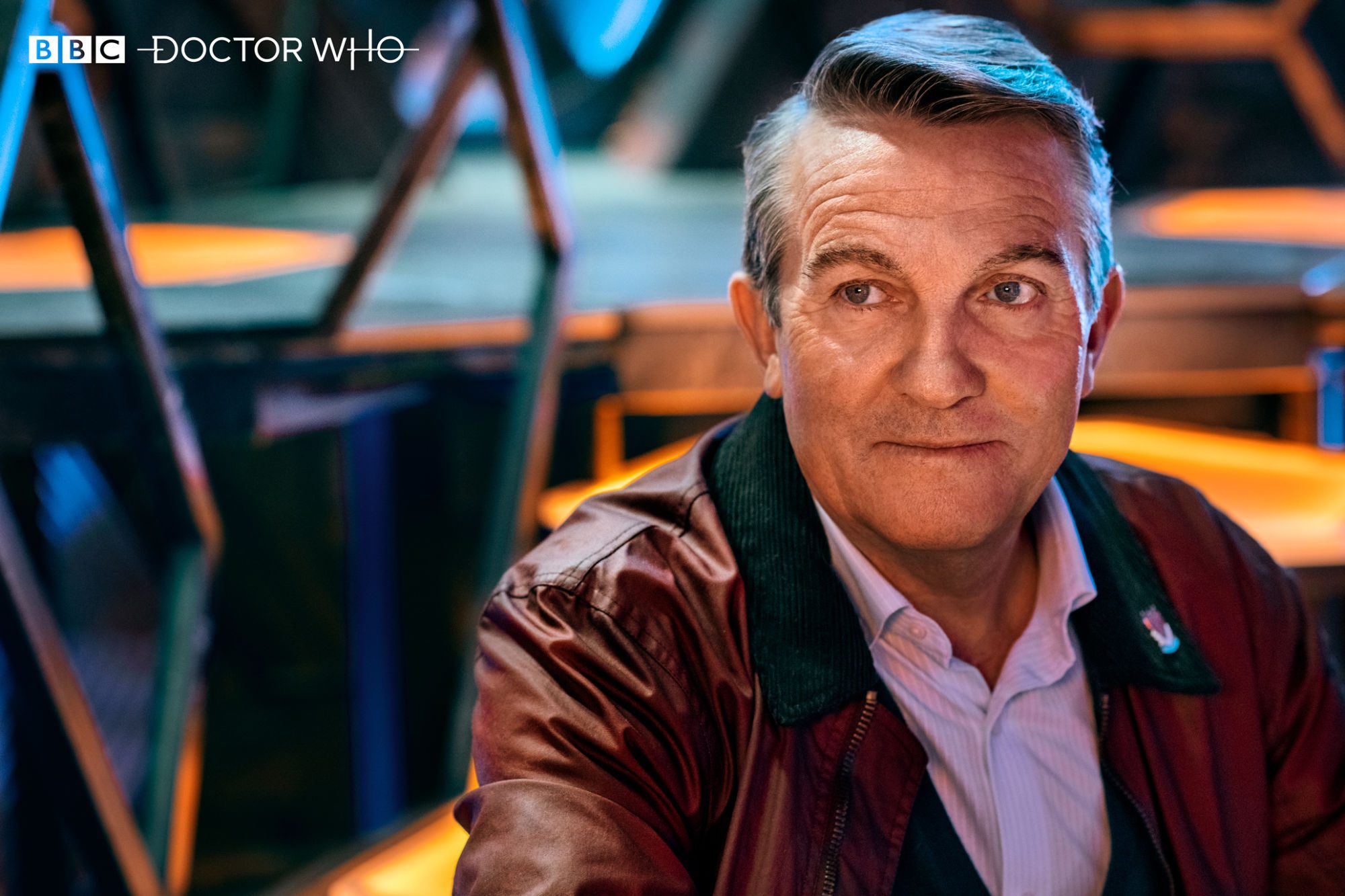 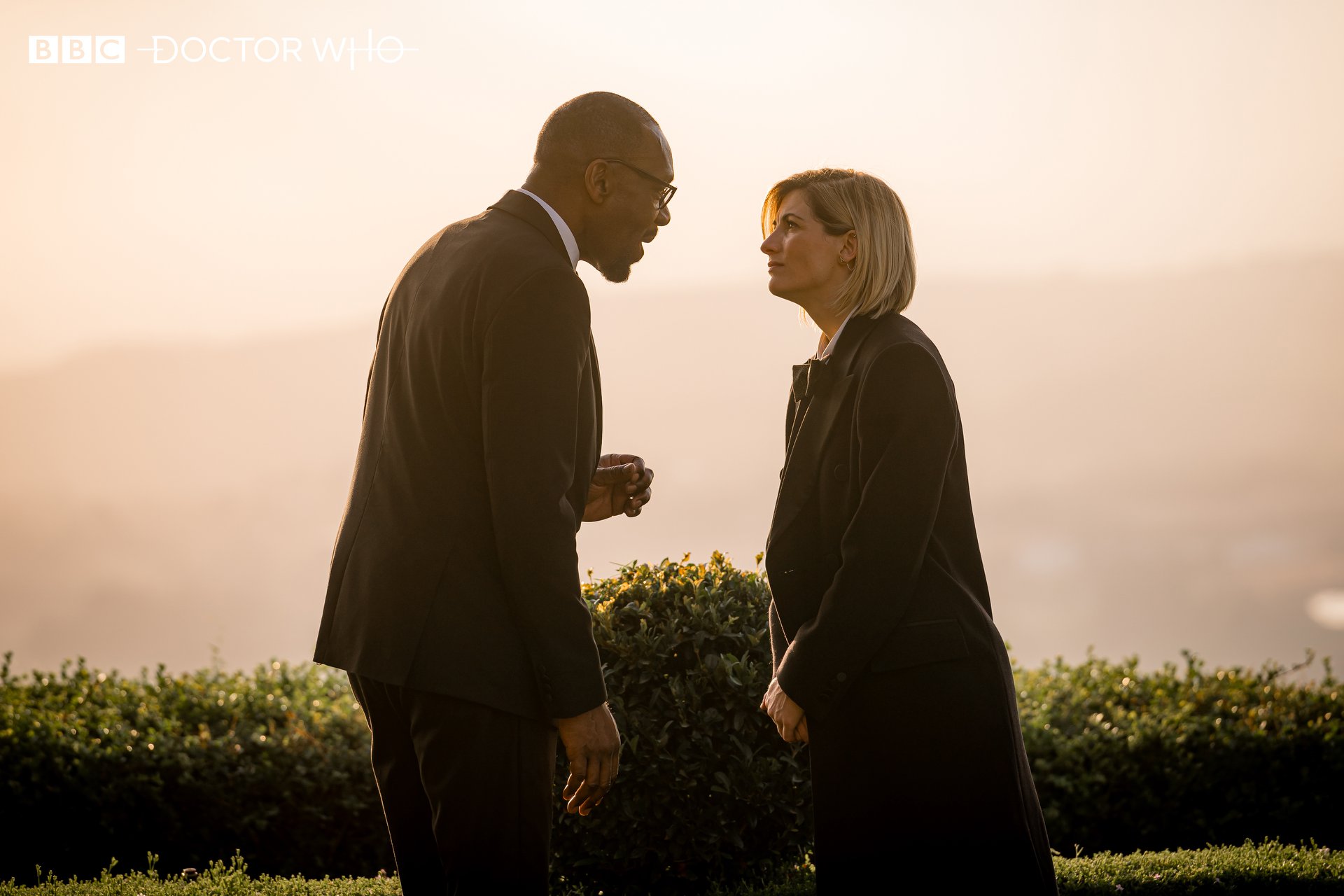 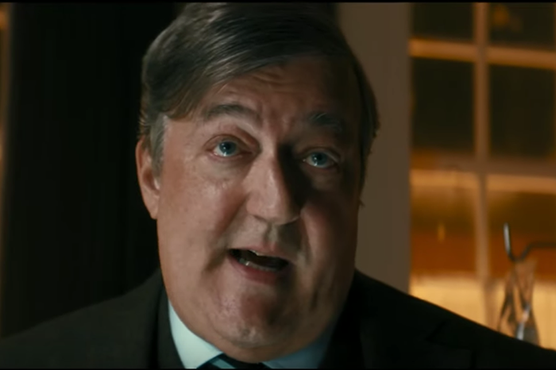 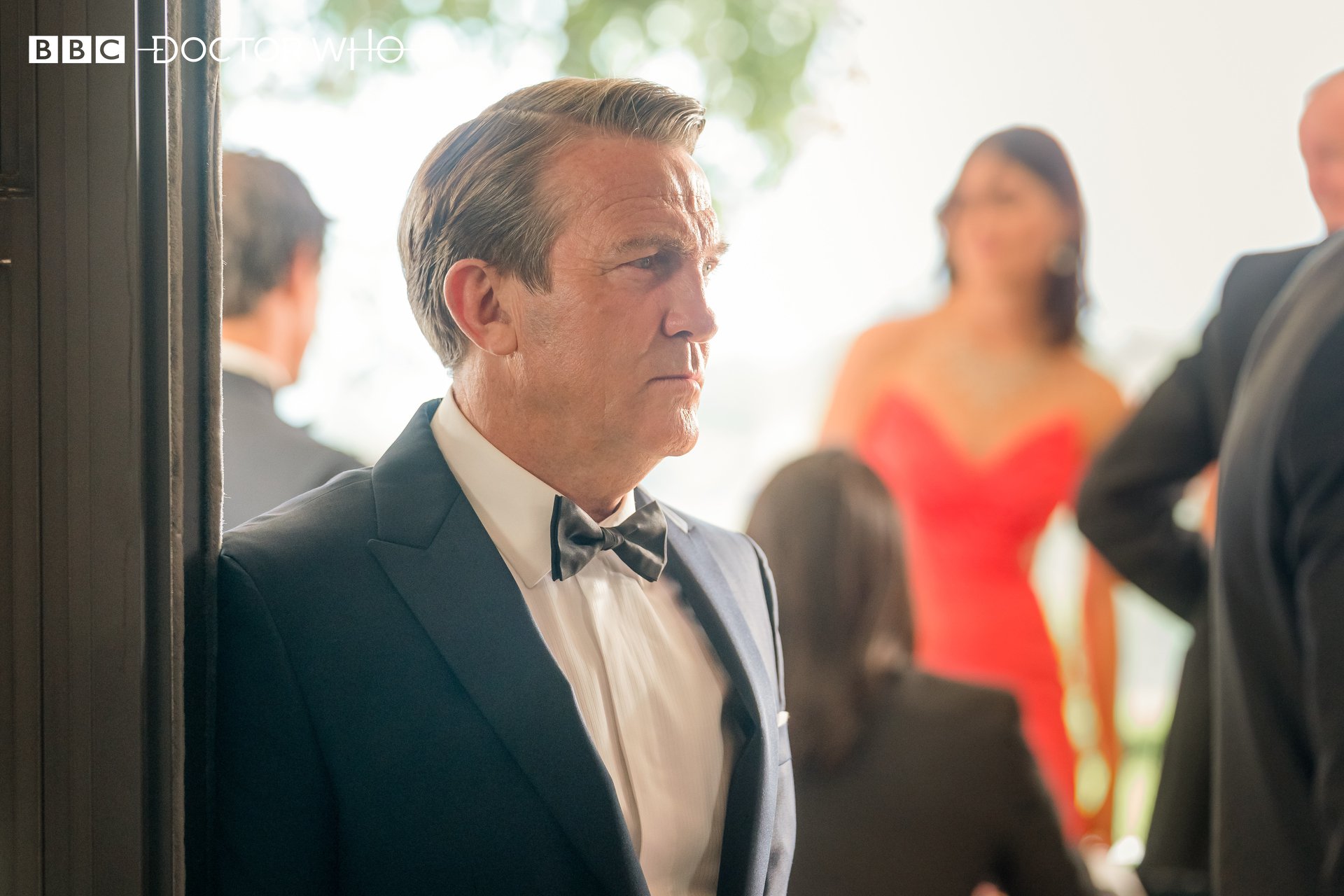 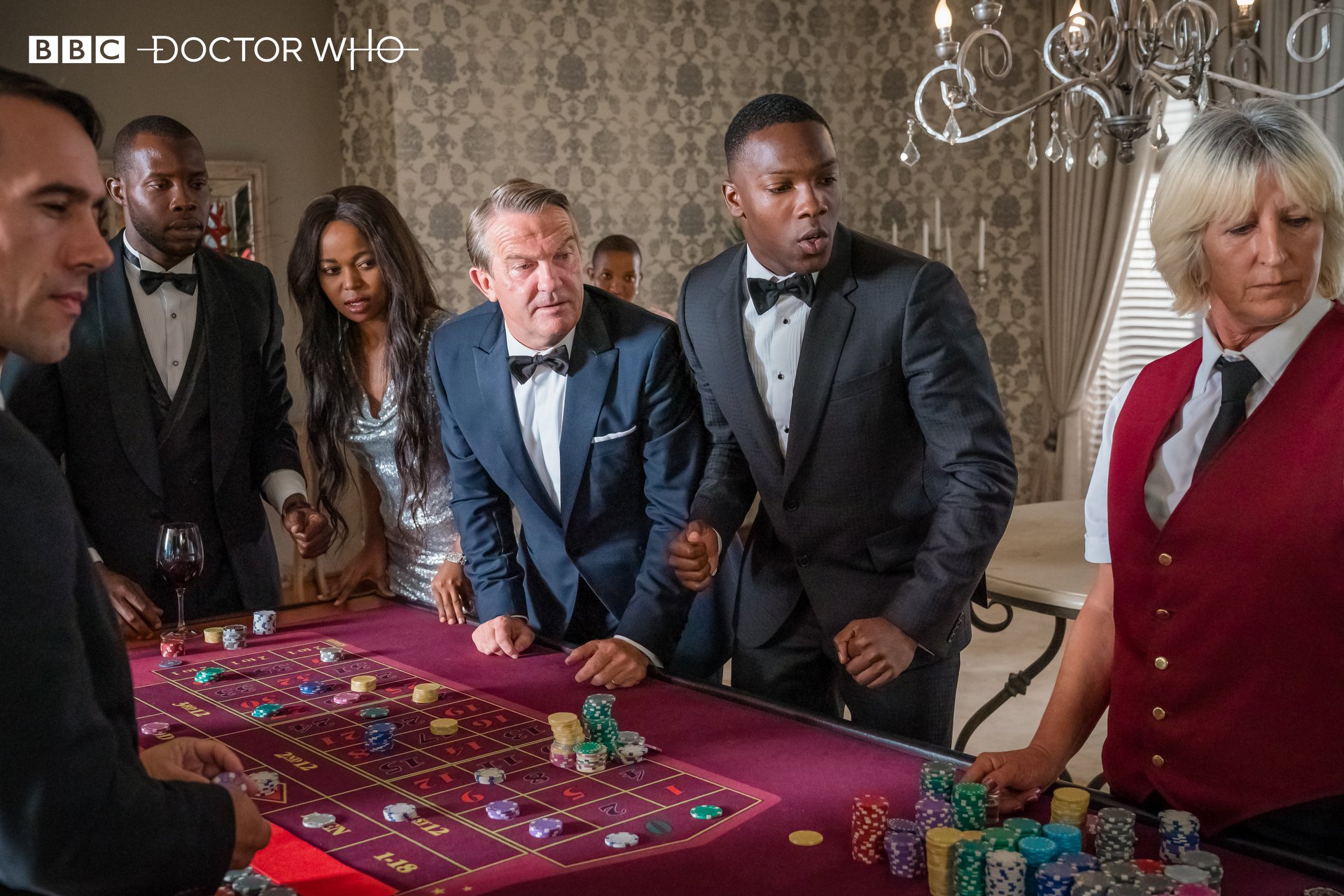 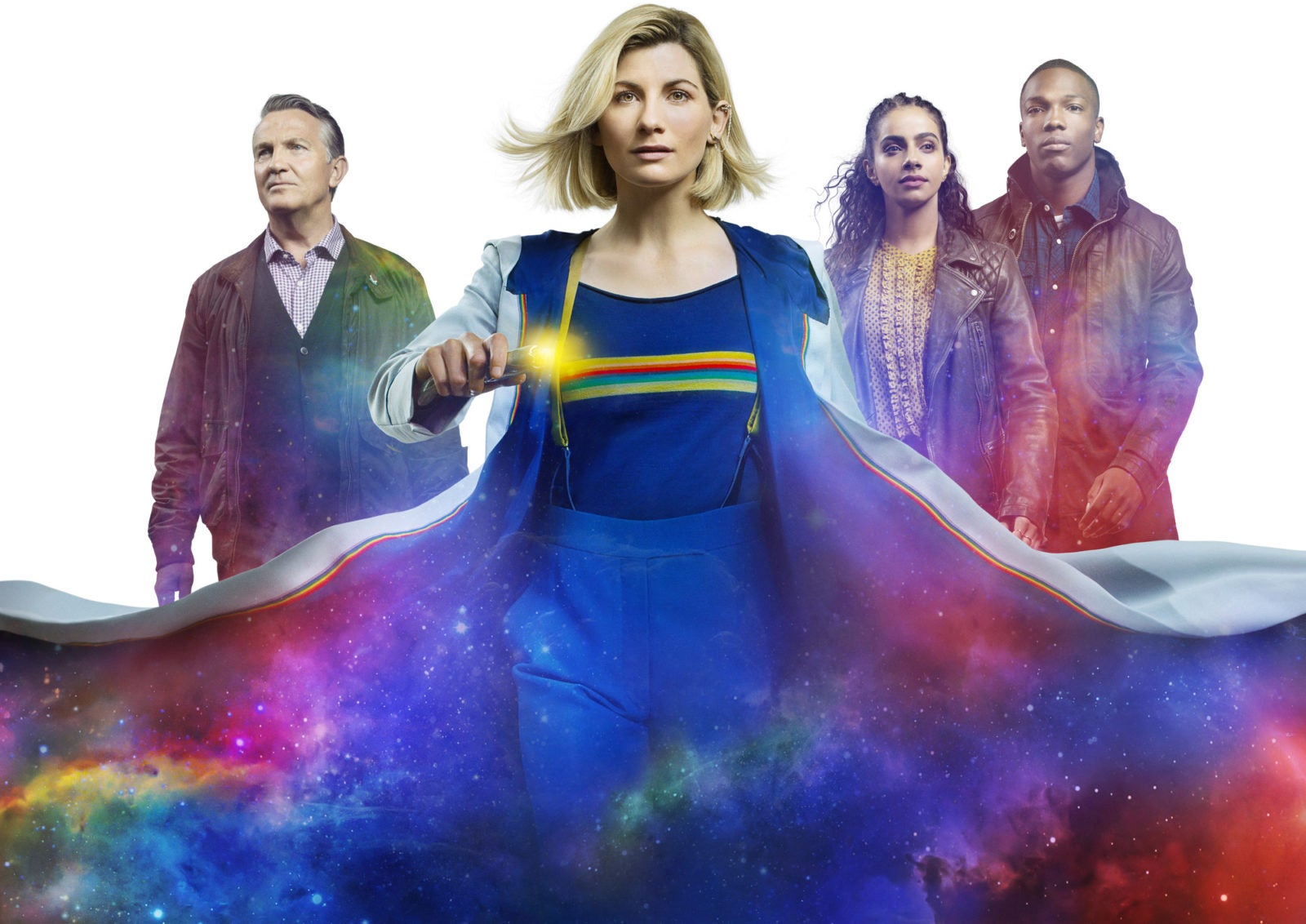 “We always knew last year would be those 10 standalone stories, and this year we wanted to weave things in a bit more.” He continued, “Obviously, even though we didn’t officially do two-parters last year, you could argue that first one (The Woman Who Fell to Earth) has a cliffhanger into the second. A two-parter that wasn’t a two-parter!”

Episodes one and two of Spyfall are coming to the big screen on January 5th courtesy of Fathom Events. In addition to screening the first two episodes of Season 12, audiences will be treated to a special live Q & A with Jodie Whittaker, Tosin Cole and Mandip Gill. 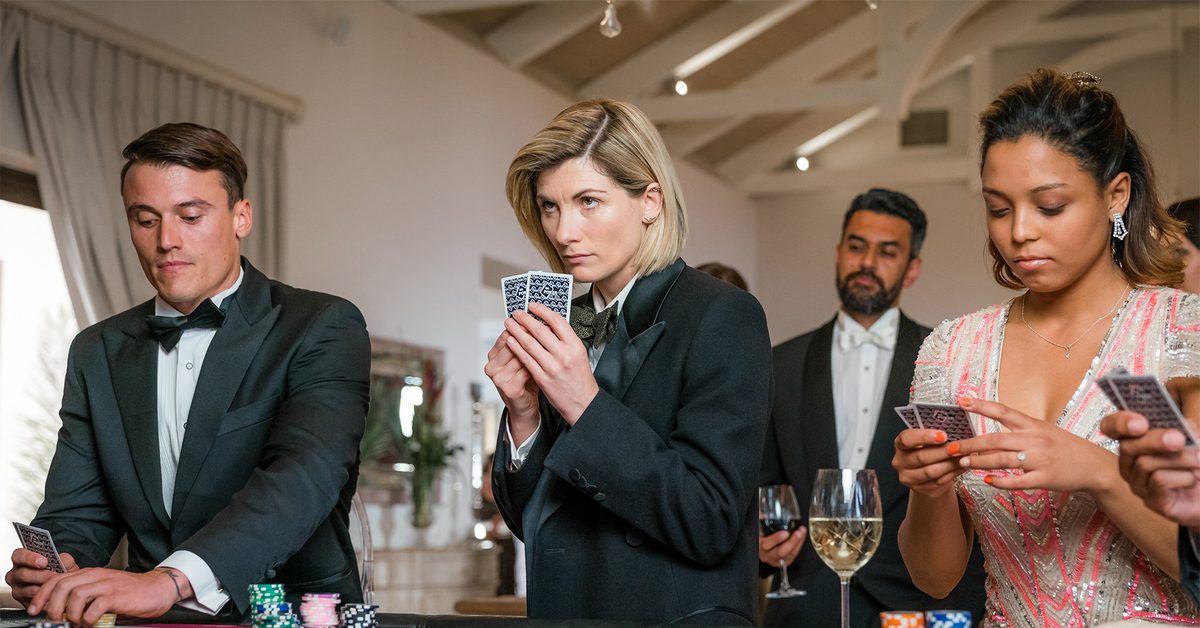 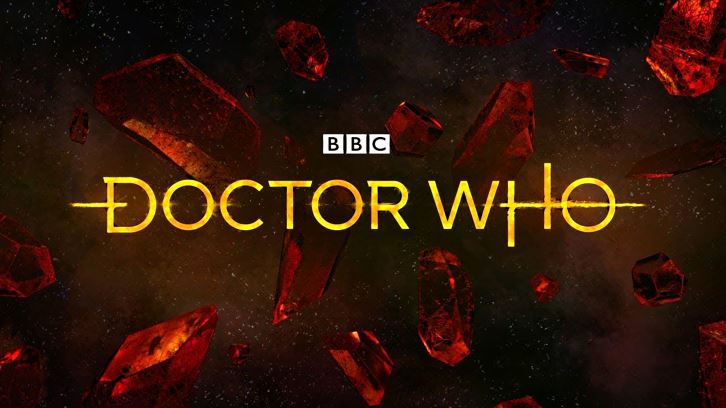 Fans in North America can see part one of the season’s first story on January 1st at 8 p.m. EST.  The remaining episodes of season 12 will air on Sunday nights at 8 p.m. EST on the network.

For obvious reasons, the BBC is being very coy about plot details of episode two of Spyfall. Lee Haven Jones directs the second installment, airing on January 5th in the UK and North America. Fathom Events will screen it with episode one in theaters.

In part two of this epic spy thriller, a terrifying plan to destroy humanity is about to reach fruition. Can The Doctor and her friends escape multiple traps and defeat a deadly alliance?

The third episode of the new season is entitled Orphan 55. It is a throwback episode of sorts in that it features the Doctor again trying to have a vacation only to find those plans crushed by a new menace. It was written by Ed Hime and directed by Lee Haven Jones. The Inbetweeners James Buckley guest stars with Neverwhere star Laura Fraser. 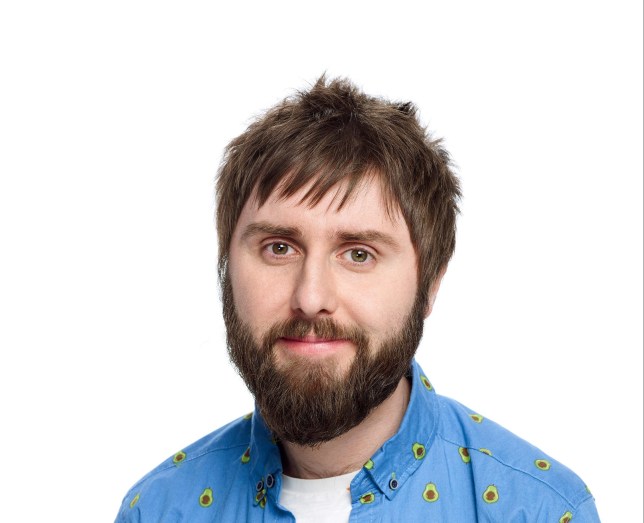 Having decided that everyone could do with a holiday, the Doctor takes Graham, Yasmin and Ryan to a luxury resort for a spot of rest and relaxation. However, they discover the place where they are having a break is hiding a number of deadly secrets. What are the ferocious monsters that are attacking Tranquillity Spa?

Next time… More Spyfall, more news and a deeper dive into season 12!

From St. Louis, Missouri, comes Anglophile, pop culture/SF writer, DJ and all around pop culture geek Rob Levy. Since 1996 Rob has served as president of the United States' oldest Doctor Who/British media fan club, The St. Louis Celestial Intervention Agency. The CIA meets regularly in St. Louis and participates in programming at many local and national conventions, including Dragon Con, where Rob is a loyal Brit Track participant for 15 years. When not working or observing the world around him, Rob watches way too much TV, reads a lot, wears black, travels, goes to shows, and traipses around used book and record stores with great fervor. He has a passion for history and a strange fascination with subway systems. He loves board games, baseball, supports Liverpool and loves a wicked curry.