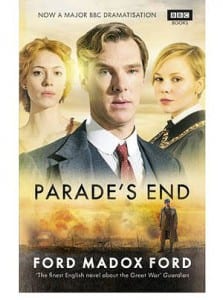 In the early 1920s author Ford Maddox Ford wrote a series of four novels (Some Do Not, No More Parades, A Man Could Stand Up and Last Post) and based them mainly on his own World War I experiences. Collectively the novels are known as Parade’s End and Maddox’s writing has prompted English political philosopher John N Gray to call the work “possibly the greatest 20th-century novel in English.”

In 2011 the BBC along with HBO commissioned English playwright Tom Stoppard to adapt the four novels into a five-part miniseries for BBC2. Stoppard began writing his adaptation before Downton Abbey became a success and comparisons will no doubt be made between the two shows. Each are set in the same era of Edwardian England unraveling as World War I smashes society. However the BBC2 Parade’s End is a good stiff whiskey to ITV’s Downton Abbey’s Pimm’s cup. Both are enjoyable but uniquely different.

Sylvia and Christopher’s marriage is not a conventional one mainly because Sylvia hates her husband. His stiff upper lip and precise social etiquette annoys her. In fact Sylvia would do anything to get a reaction out of her husband even going as far as to flaunt her multiple lovers in his face before running off to France with one. Devastated that his wife has left him, Christopher puts on a brave face and goes about his life as a mathematical genius at the Department of Statistics. He even invents a story to cover for Sylvia’s absence so she will not be socially harmed. Only his closest friend knows of Sylvia’s multiple liaisons. When asked why he won’t divorce his wife Christopher simply conveys that he stands for monogamy and would never put Sylvia through a divorce. It would kill her socially. Sylvia meanwhile can’t divorce her husband as she is a Catholic. Therefore the Tietjens are stuck together forever. 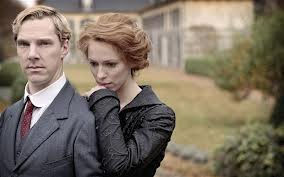 Quickly tiring of her lover Sylvia simply sends a telegram to her husband informing him she would like to return home. Upon her arrival the fact that Christopher shows no reaction, only to treat his wife with kindness, infuriates Sylvia further.

In Sylvia’s absence Christopher meets Valentine Wannop the daughter of a family friend. She is young, political and everything Sylvia is not. Tietjens is captivated. Christopher and Valentine are completely at odds with each other’s beliefs and ideals but both are incredibly attracted to each other. Though no physical action is taken their affection for each other is quite obvious. Even Sylvia sees it and out of jealousy warns Valentine to ‘keep off the grass.’ 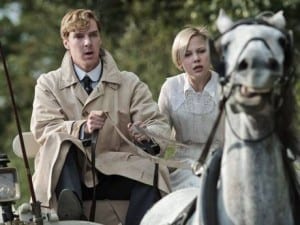 With the addition of Valentine to Christopher’s life he now becomes a part of a love triangle. Once a lonely man stuck in a loveless marriage he is now torn between two women. the emotionally damaged wife he married out of a sense of  social necessity and the young and pure girl who touches his heart in all the right places. Factor in the looming war and the BBC has created a modern-day masterpiece out of a book that is nearly 90 years old.

Ford Maddox Ford has created a love triangle so deep and layered with two equally strong yet opposite women that it is hard to believe that it was written by a man. Parade’s End is an extremely well written book which the world has seemed to have forgotten.

Taking such rich material and condensing it into an emotionally charged but sometimes humorous television adaptation will surely be recognized some awards season. Yet it is the reader and the viewer who is richly rewarded with beautifully layered characters and emotionally charged performances.

Adapted for the BBC and HBO by Tom Stoppard Parade’s End stars Benedict Cumberbatch, Rebecca Hall and Adelaide Clemens. The fifth and final episode airs on BBC2 September 21st and the miniseries will air in the US on HBO sometime in 2013.

Heather is in the process of becoming a world traveler by having visited over 18 countries in 14 years. While she is happy to add new stamps to her second passport her heart and mind is always with England. She loves all things English but is particularly fond of Cadbury Flake, shopping at Boots, National Theatre Live and Sherlock. You can follow her travels at http://www.thejetlaggedvagabond.com/