You are here: Home / Anglotopia Magazine / Great Britons: A.A. Milne – The Creator of Winne the Pooh 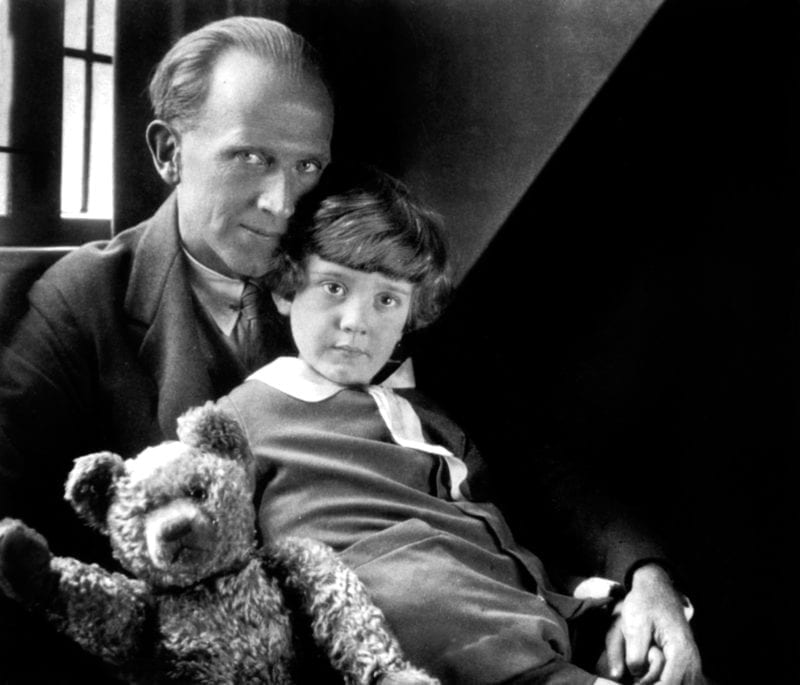 Editor’s Note: This article originally appeared in Issue #11 of the Anglotopia Print Magazine in 2018. Support great long-form writing about British History, Culture, and travel by subscribing to the Anglotopia Magazine. Every subscription helps keep Anglotopia running and provides us to the opportunity to produce articles like this. You can subscribe here.

A. A. Milne was an English author who began his career as a humorist, novelist, and playwright, but who saw his early successes eclipsed by his success as a children’s author. He created the characters Christopher Robin and Winnie-the-Pooh from his own son and his stuffed bear. Their exploration of Ashdown Forest, beside the farm they lived in, became the inspiration for books of their adventures, written in a child-like style. He saw active service in both World Wars and knew many of the major literary figures of early 20th century England. His sale in the 1930s of the rights to his characters to an American agent led to their commercialisation, and their development into a major marketing phenomenon.

While no one would ever ask, “Winnie-the-Who?”, many people today might have trouble recognising the name A. A. Milne. Creators can be eclipsed by their creations, and Milne himself regretted that of all his work, it was his, “trifles for the young” that became his legacy. Milne’s nostalgic vision was a product of those brittle years between the ‘War to End All Wars,’ that destroyed the halcyon days of Edwardian England, and the encroaching darkness of the total war and genocide of World War II. Those brief decades were his formative years.

Alan Alexander Milne was born in 1882, and he grew up in the south London neighborhood of Kilburn. He lived in Henley House, a small ‘public school’ run by his father, meaning it was a private, fee-paying establishment. Milne was a pupil, and when he was seven, H. G. Wells was briefly the school’s science teacher. His father John Vine Milne had been born in Jamaica – it was a British colony at the time – and his mother was Sarah Marie Heginbotham, from Derbyshire. Milne moved on to the prestigious Westminster School, and from there to Trinity College, Cambridge, graduating in Mathematics in 1903. His literary interests were apparent, however, as he edited and wrote for The Granta, a student magazine that was a literary outlet for several other future famous writers. R. C. Lehmann was an earlier Granta editor who had moved on to become a major contributor to the influential humorous and satirical magazine, Punch. After his graduation, Milne was soon also contributing regularly, and he became assistant editor to the magazine in 1906.

In 1913, Milne married Dorothy de Sélincourt, known as “Daphne.” After the outbreak of World War I, he joined the army as an officer in the Royal Warwickshire Regiment. Injured at the Battle of the Somme, he was sent back to England, where he wrote propaganda for military intelligence with MI7. Daphne had a son, Christopher Robin Milne, in 1920.

In the years bracketing WWI, Milne built a successful literary career, writing 18 plays and four novels. He also wrote four scripts for the early British film industry, all made into films by Minerva Films, owned by the actor Leslie Howard. Milne complained that whatever he wrote, his editors thought he should be writing something else. Despite Milne’s own high regard for these works, they have faded into near-oblivion, overtaken by the result of his buying Cotchford Farm, in Hartfield, East Sussex, in 1925. Milne, Daphne, and Christopher Robin began an idyllic life there, with Milne wandering the surrounding countryside with Christopher, joining his son in the magical discovery of the world by young children during their early years of innocence.

Cotchfold Farm is on the edge of Ashdown Forest, an area of heathland and woods that had been a hunting forest since the Norman Conquest of England. Part of it is called Five Hundred Acre Wood, which became Hundred Acre Wood in Milne’s fictional creations. Christopher’s stuffed bear, named Winnie after a Canadian black bear and ex-military mascot that lived in London Zoo, also famously figures in the stories. The ‘Pooh’ part was the name of a local swan. Piglet, Eeyore, Kanga, Roo, and Tigger were all stuffed toys belonging to Christopher, while Rabbit and Owl are fictional. 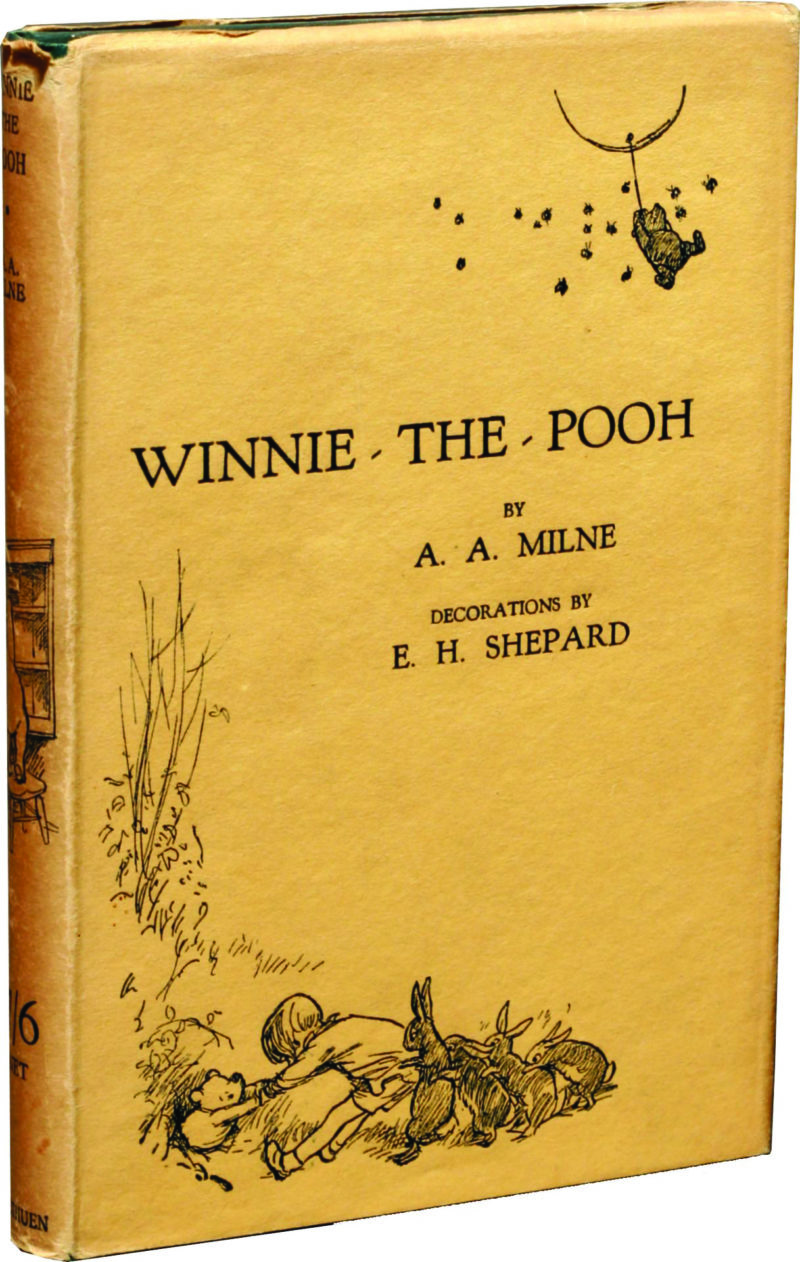 Pooh, still unnamed, first appeared in a poem, “Teddy Bear,” published in Punch in February 1924. “When We Were Very Young”, a book of children’s poems, including “Teddy Bear”, appeared later the same year. The named Pooh first appeared in a story called, “The Wrong Sort of Bees”, which saw the light on Christmas Eve, 1925, in the London Evening News. “Winnie-the-Pooh” was published in 1926 and “The House at Pooh Corner” in 1928. A collection of nursery rhymes, “Now We Are Six”, was published in 1927. All the original editions were illustrated by E. H. Shepard.

In 1922, Milne had published a detective novel, “The Red House Mystery”, which had met with some acclaim. He was well-known both in England and America as a successful playwright. After the publication and immediate success of the Pooh books he still wrote for Punch, and he also wrote a still-performed stage adaption of Kenneth Grahame’s novel “The Wind in the Willows”, called “Toad of Toad Hall”. In the aftermath of WWI, he removed the chapter called ‘Piper at the Gates of Dawn,’ which recounts a search for a lost son, from the play. Too many members of the audience would have lost sons in the war.

In 1934, as tensions in Europe increased, Milne wrote a condemnation of war called “Peace with Honour.” By 1940, his position had shifted, and he wrote “War with Honour,” to support the efforts of a country now at war – just 20 years after the last time. During WWII, he served as a Captain in the Home Guard, a division of the military responsible for home defense.

At a personal level too, the idyll of Cotchfold Farm had been shattered, although he continued to live there for the rest of his life. The success of the Pooh books had made his all-too-flesh-and-blood son a celebrity, and this was a role that Christopher Robin did not enjoy. He became estranged from his parents and felt used by his father. He is quoted as having said, “We’ll see how father likes it when I write poems about HIM!” Christopher Robin moved further away from his parents when he married his cousin Lesley de Sélincourt, something legally permitted in the UK. Her father and Christopher’s mother were estranged, and they had not spoken for 30 years, so this was hardly a move to unite the family. 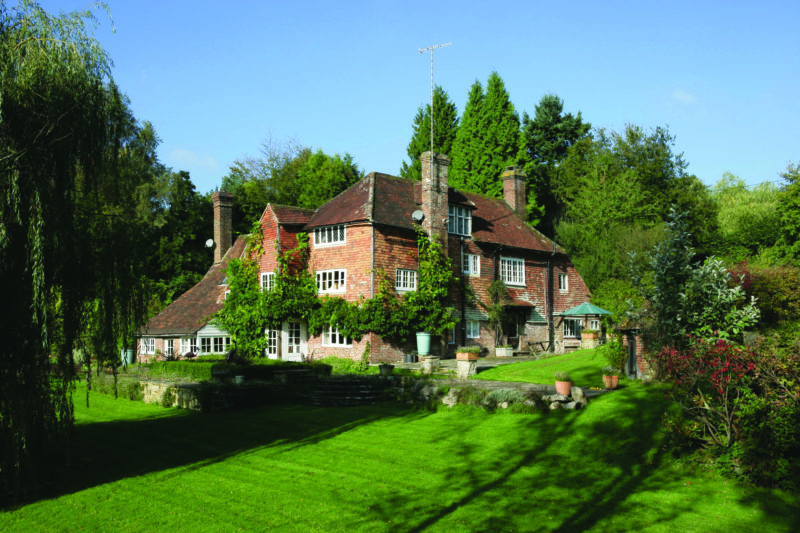 Critical reviews were rare, but the adult Christopher Robin might have sympathized with the words of ‘Constant Reader,’ a weekly column in the New Yorker written by Dorothy Parker – Tonstant Weader twowed up.

In 1952, Milne suffered a stroke. That, and the surgery it required left him an invalid and he became disheartened with life, probably entering a period of depression. He died a few years later, in January 1956, aged 74. As for Winnie-the-Pooh, in the 1930s Milne had sold merchandising, television, and recording rights to Stephen Slesinger, an American pioneer of the rights licensing industry. When Slesinger died, his widow, in turn, sold many of the rights to the Disney Corporation, leading to today’s massive commercialisation of Milne’s original simple characters.