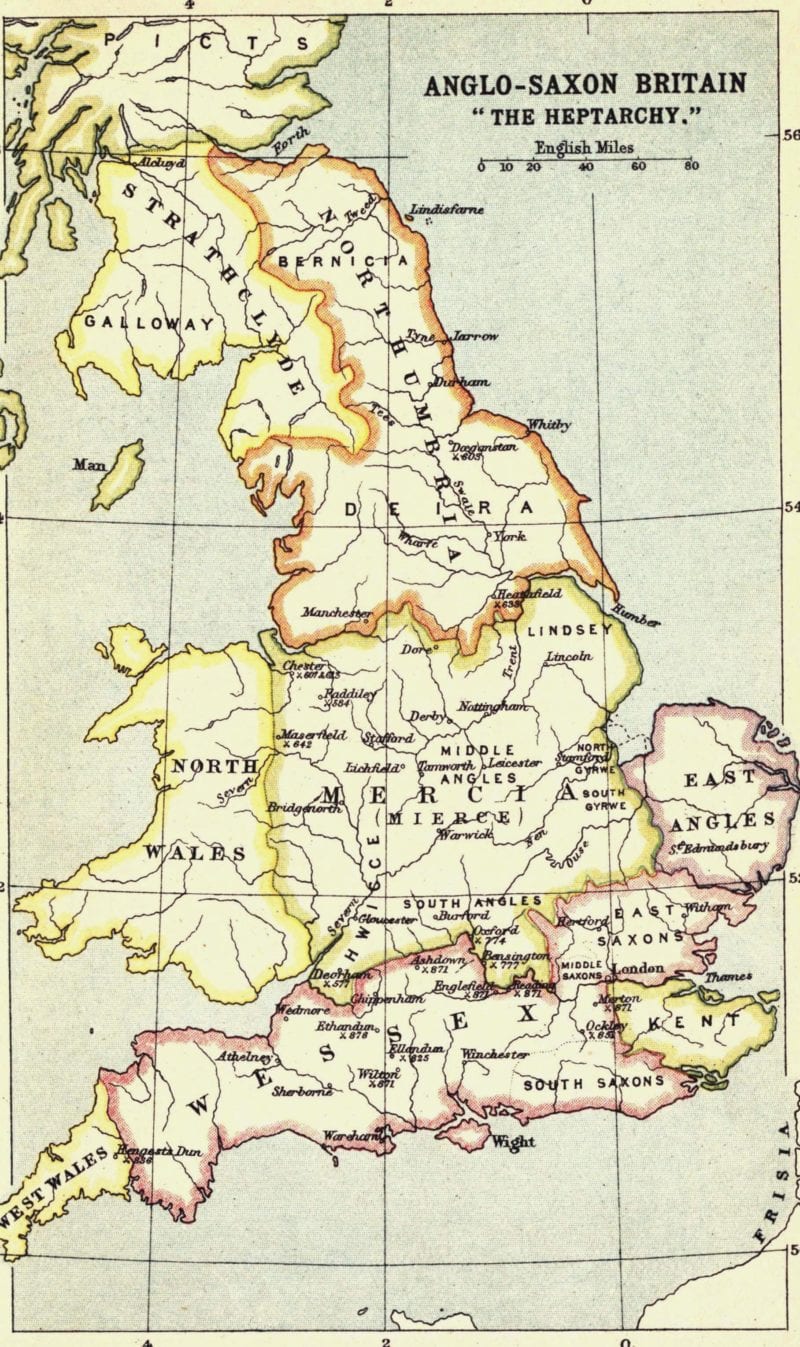 The Anglo-Saxons spent just over half a millennium as the dominant power in England from the end of the Roman occupation in the 5th Century until the Normans invaded in 1066.  During this time, the two groups that were the Angles and the Saxons came together, formed the first kingdoms on Great Britain, and battled the Vikings for control.  It was a formative time for England and the United Kingdom as a whole and the influence of this group would be felt long after their fall and the next era of English history began.

Of course, it all started around 409 AD when the bulk of Roman forces left England as the empire found itself at siege from Germanic tribes.  While the Romans left behind a number of detachments to defend its various outposts and settlements, they were woefully unprepared for the invading Anglo-Saxons.  The group of Germanic tribes had long plagued the Romans during their rule, but once the majority of the army was gone, they stepped up their raids and invasions until they gained a foothold in Southern and Eastern England.  While some Britons attempted to hire the Anglo-Saxons as defense against the Celts and the Picts, others fought them, and it was during this time that the legend of King Arthur began to take root.

By 650 AD, the Anglo-Saxons settled enough that their kingdoms formed, a time also known as “The Heptarchy”.  The seven kingdoms were:  Mercia, Northumbria, East Anglia (an eastern kingdom settled by the Angles), Essex (the East Saxons), Sussex (South Saxons), and Wessex (West Saxons).  The kingdoms spent as much time fighting the Britons, Celts, and Picts as they did one another, but it wouldn’t be long before Mercia managed to conquer must of Great Britain, becoming the largest Anglo-Saxon kingdom.  Mercia was eventually replaced in this role by Wessex, but starting at the end of the 8th Century, the Vikings began their own raids which continued until 850 AD when they began settling and challenging the Anglo-Saxons for dominance of England.

Most of the Danes settled in the kingdoms of Mercia and East Anglia and were the major sources of power there until King Alfred the Great began a military campaign in 878 that succeeded in reestablishing Anglo-Saxon dominance, though as the only kingdom not heavily ravaged by the Vikings, that meant that Wessex dominated much of England.  Some Danish influence remained, but it was largely confined to the rule of Cnut the Great.  After his death, the rule of England eventually fell to King Edward the Confessor.  Edward himself died without an heir, leading to a succession crisis that would change England forever.

In Edward’s absence, two claimants for the throne arose in the forms of Harold Godwinson and William, Duke of Normandy.  William claimed that Edward had made a promise to name him as the heir and Edward’s mother was related to William, giving him a strong claim by blood.  Harold, meanwhile, Godwin, Earl of Wessex, had been a powerful member of Edward’s court and was the preferred favorite of the other Anglo-Saxon lords.  It’s rather unclear what Edward’s real intentions were and historians still debate who had the actual claim to the throne.

However, when the Anglo-Saxon nobility proclaimed and crowned Harold, William vowed to take his promised throne and launched an invasion in 1066.  At the same time, Vikings struck in East Anglia and Lincolnshire, led by Harold’s brother, Tostig Godwinson.  Rather than preparing himself to face William, Harold marched his men north to defeat Tostig and the Danes at the Battle of Stamford Bridge, then south again after William’s forces landed.  It was when the Anglo-Saxon and Norman forces met at the Battle of Hastings that the Anglo-Saxon period came to an end.  Harold was slain in battle and William was crowned King of England on December 25, 1066, ushering in a dynasty that would change the fate of the country, and the world, forever.