You are here: Home / British History / Exclusive Preview of the new Mary Rose Museum – Ship Brought back from the Ocean

The Mary Rose is the world’s only surviving sixteenth century warship. This £35 million project reunites the hull of the Mary Rose with many of the 19,000 Tudor artefacts recovered from the seabed providing an unrivalled perspective of life on board the sixteenth century ship. The Mary Rose Museum opens to the public on 31 May 2013. I went for a preview about a month before opening.

What is the Mary Rose?

Built in Portsmouth dockyard and launched in 1511, the Mary Rose was one of the first ships to be able to fire broadside and was a firm favourite of Henry VIII. She was also one of the last ships to have archers shooting longbows.

Contrary to popular belief, she did not sink on her maiden voyage and actually saw 34 year’s service as a king’s warship. 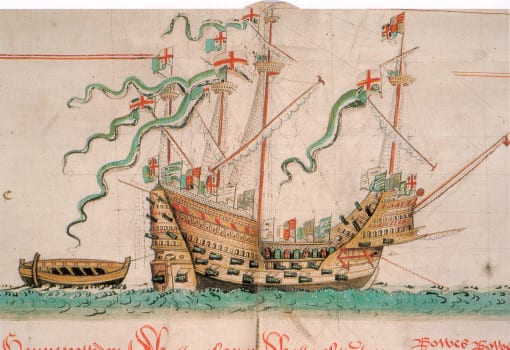 Battle of The Solent

The Solent is a strait separating the Isle of Wight from the mainland of England. This 1545 battle played out in Portsmouth harbour when French ships arrived – twice as many as in the Spanish Armada.

No-one knows exactly why the Mary Rose sank but she took part in the battle and sank on 19 July 1545, going down 50 feet to the seabed taking most of the crew with her. King Henry VIII saw the Mary Rose go down as he was watching from Portsmouth’s Southsea Castle. The starboard side stuck in the mud on the seabed and there she stayed for over 400 years.

In 1971 the Mary Rose was found by scuba divers and so begun the largest underwater excavation and recovery ever undertaken in the world.

On 11 October 1982 she was lifted out of the water. The event was televised and watched by 60+ million viewers. And probably all of them gasped as the ship slipped and we all worried she would fall back into the water.

When the hull was raised she was sprayed with recycled, fresh water at a temperature of less than 5ºC to stop the wood drying out and to inhibit bacterial activity. In 1985 the ship was turned upright and a series of titanium props were installed to support the internal structure.

Since 1993/4 she has been sprayed in the “hotbox” with Polyethylene Glycol (PEG) which is a water soluble polymer. (The hotbox is probably the largest environmentally controlled case in the world.) The sprays were switched off at 7.27am on 29 April 2013 (and I visited on 30 April so was one of the first to see the ship without the sprays!)

She must now be air dried evenly to remove up to 100 tons of water from the ship’s timbers using fabric ducts in a highly sophisticated pattern. 55% relative humidity and 20ºC is considered favourable and it’s going to take 4 to 5 years.

Even when the drying comes to an end the building’s temperature, light and humidity will be very carefully controlled. The hull will remain on its original recovery cradle and will not be moved from its current position in dry dock.

Upon completion of the air-drying phase of the hull conservation, the hotbox enclosure will be removed allowing visitors to fully appreciate new and dramatic views of the Mary Rose’s original timbers.

The Mary Rose Museum is a Tudor time capsule with 1700m² of gallery space across three floors. The new Museum has been built around the hull of the ship and has been conceived as a finely crafted, wooden jewellery box. It is clad in timber planks and painted black, and is located next to HMS Victory in Portsmouth Historic Dockyard – only 20 yards away from where it was built over 500 years ago.

As there is roughly half of the ship left the missing side of the hull is the museum with displays of what would have been on each deck in context, like a virtual hull. There is a central walkway which appears to be down the middle of the ship with windows available to see the ship in its “hotbox”. After the drying phase this will be changed to sheet glass.

This is a low-light museum to protect the delicate artefacts, and there are atmospheric sounds of water.

There are three floors: Upper Deck (Castle Deck), Main Deck and Lower Deck (Hold), connected by stairs or a large lift/elevator. The lift has a glass side so you can see the Mary Rose while travelling between the floors.

Creating a brand new museum around the hull of the Mary Rose, while conservation continues, has not been a cheap process. £27 million was needed for the design, build and construction, and a further £8 million for the final phase of conservation. Rear-Admiral John Lippiett, Chief Executive of the Mary Rose Trust declared, “The Heritage Lottery Fund are the saviours of this project” as without them the conservation would never have been possible.

There are 8 million Mary Rose £2 coins in circulation. If you find one do consider sending it to the Mary Rose Museum for their ongoing fundraising.

So much can be learned from the recovered items. There are 19,000 in total and as many as possible are going on display. For example, it was thought the Gimbal compass wasn’t invented until 100 years later but three were found on the Mary Rose. The earliest fiddles to exist anywhere are on display with other musical instruments, along with the greatest collection of archery equipment in the world.

Everything that is on display behind glass is real and original. There are a few items made of Perspex that are simply used to complete the reconstruction.

The “aah” factor comes when you see the skeleton of Hatch, the ship’s dog who was there to catch the rats on board. Many will be pleased to know there are cuddly version of Hatch available in the gift shop.

Rosary beads are on display and evidence of up to 10 paternosters were found in the wreck. The Mary Rose was built and crewed during the time of the dissolution of the monasteries and the banning of Catholicism in the UK by Henry VIII.

“When their world ended, our story began…”

Nearly all of the crew drowned when the Mary Rose went down. The Museum is dedicated to those who lost their lives when the Mary Rose sank on 19 July 1545. There are human remains on display and the Bishop of Portsmouth will bless the Museum before it opens. Historian Dan Snow described the Mary Rose as “this country’s Pompeii”.

The Mary Rose did not carry a list of crew members, just a list of numbers. There were 415 crew and the only names known are Vice Admiral, Sir George Carew and the Master – Roger Grenville.

Through incredible facial reconstructions of seven members of the crew, that have been created using forensic science and osteoarchaeology, six themed galleries tell the personal stories and working lives of the crew on board such as the carpenter, cook and an archer.

The ground floor gift shop is large and bright, and some exclusive items have been produced just for the Museum such as a cuddly version of Hatch the ship’s dog.

On 30 May 2013 there will be a day of celebration and ceremonies involving elements of the Royal Navy and well known historians. The day will be based around the journey of the Mary Rose’s ship’s bell into the museum. This symbolic journey will begin at sea, over the wreck site, and end in the Museum.

Travel: The Mary Rose Museum is within Portsmouth Historic Dockyard which is a few minutes’ walk from Portsmouth Harbour train station. Trains from London take under 2 hours.

Portsmouth Historic Dockyard: This is the leading attraction on the south coast. The site is home to The Mary Rose, HMS Warrior 1860, HMS Victory, National Museum of the Royal Navy, Action Stations and Harbour Tours, providing 800 years of the British naval story.

Recommended Visit Duration: They are still monitoring this but I would say plan for 2 hours as there is so much to see.