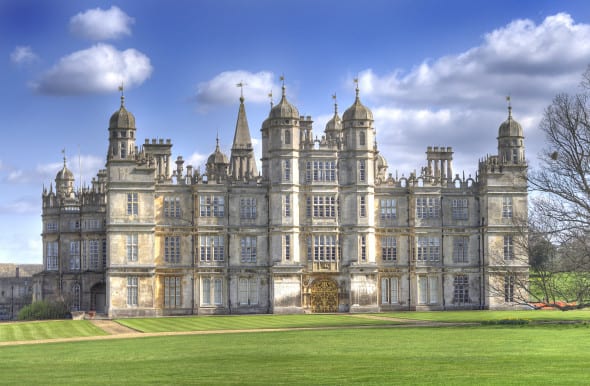 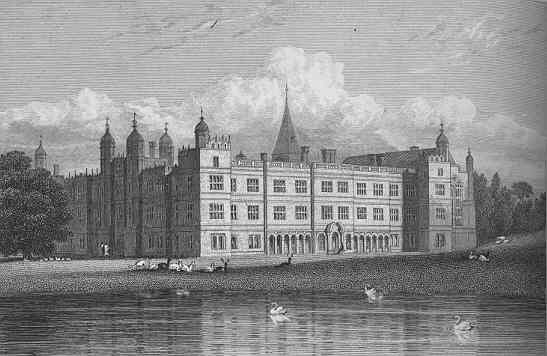 Sir William Cecil began his career as a lawyer and under the Protector Somerset, came to occupy one of the highest ranking positions in Queen Elizabeth I’s inner circle. Designed by Cecil himself, Burghley House came to symbolize all of the might and splendor of Elizabethan court. Less a family home, more a small kingdom, Burghley was built to house the Cecil descendants, a powerful dynasty that has, since 1801, included the marquesses of Exeter.

Burghley’s exteriors are a perfect example of sixteenth-century Elizabethan architecture with its three facades reflecting the perfect symmetry of 16th century design. The plan for Burghley began as an almost modest, by Elizabethan standards, medieval manor house with a courtyard following from a gatehouse and a porch giving access to the Great Hall. Soon, these plans were overwhelmed and the floor plan of the house grew to create a letter E, in honor of the Queen, while the main part of the house swelled to include 35 main rooms on the ground and first floor. There are also over 80 smaller rooms and scores of halls, bathrooms and service areas in the rest of this sprawling palace, whose exterior is adorned with ostentatious porches and pennants and roof with a multitude of cupolas, pavilions and chimneys.

Burghley was built gradually over the course of Lord Burghley’s long career and upon his death in 1598, most of the interiors were still undecorated and unfurnished. Most rooms remained bare until the house passed into the hands of the 5th Earl of Exeter and received its sensational makeover. The 5th Earl and his wife, Lady Anne Cavendish, were a well-traveled pair and throughout the 1680s and 1690s, while Britain tried to remake itself following the Restoration, they indulged themselves in four Grand Tours of Europe. The seventeen rooms on the principal reception floor of Burghley are filled with the treasures amassed by the Earl and Lady Cavendish during this time. The rooms feature over 300 paintings, as well as tapestries, fine furniture and sculptures. The overall effect of these lavish rooms is on par with one of Europe’s finest museums, or the state rooms of Windsor Castle itself.

In the rest of the house, the Grand tour collection continues with the chapel decorated with a work by Paolo Veronese, taken from a church on the Venice island of Murano. Similarly, the chapel’s marble fireplace once adorned a church somewhere in Portugal. The state dining room marvels with an Anthony and Cleopatra wall mural by Laguerre, the brown drawing room features portraits by Gainsborough and the black-and-yellow bedroom is home to exquisite carvings by Grinling Gibbons. For a look at the relationship that made all of this possible, wander to the Pagoda Room to see two paintings by Gheeraerts, depicting Burghley and his Queen. Of course, Queen Elizabeth had her own bedroom in case she ever chose to come and stay, with the finest tapestries and bed hangings in the whole palace, but her only planned visit was prevented by an outbreak of smallpox in the area. 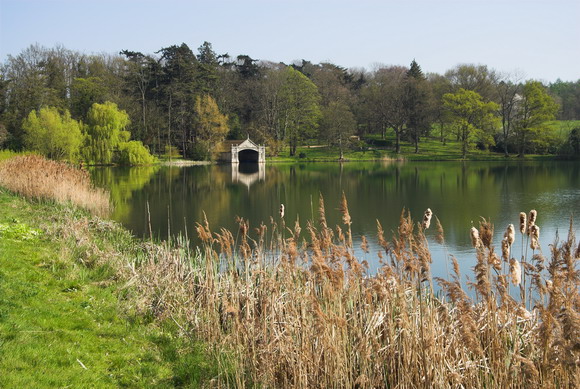 There wasn’t much that could be done by subsequent generations to improve on what the 5th Earl did at Burghley and little changed until the 9th Earl took control. By now, it was the mid-eighteenth century and the 9th Earl of Exeter, Lord Burghley Brownlow Cecil, furnished the official state rooms at Burghley House in honor of the first of the Hanoverians. Old Master paintings adorn the walls of what is often referred to as the George Rooms, which contains furniture by Boulle and a Piranesi fireplace. The two really unmissable rooms at Burghley House are, of course, Heaven and Hell. In one, a Roman temple shows us views of a beautiful sky and in the other, the floor disappears into a dark staircase. The 9th Earl also enlisted Capability Brown, the leading landscape gardener of the day to lay out the gardens at Burghley.

Today, Burghley House is ran by a charitable trust headed by members of the Cecil family, but the Burghley title is currently held by the many-titled Michael Cecil, 8th Marquess of Exeter, 17th Earl of Exeter and 19th Baron Burghley.

There is nowhere quite like Burghley. The only great houses that can compare with Burghley’s grandiose Elizabethan architecture and world-class grand tour collection are those that were built to house kings and queens. The treasures amassed by the 5th Earl of Exeter and Lady Cavendish during their multiple Grand Tours of Europe elevate Burghley from being just another fine country house to one of the most spectacular houses in England.

Burghley House in TV and Film

Burghley House is open to the public every day except Friday during the summer months. Admission charges as of 2015 are £13.50 for adults and £6.70 for children. For more details on opening hours and admission fees see the website www.burghley.co.uk.

If visiting Burghley by train, the nearest train station is Stamford, a short taxi ride or 30 minute walk to the entrance. Stamford station can easily be accessed from the London to Edinburgh mainline. If traveling by car, exit the A1 at Carpenters Lodge and follow the signs to Burghley House.