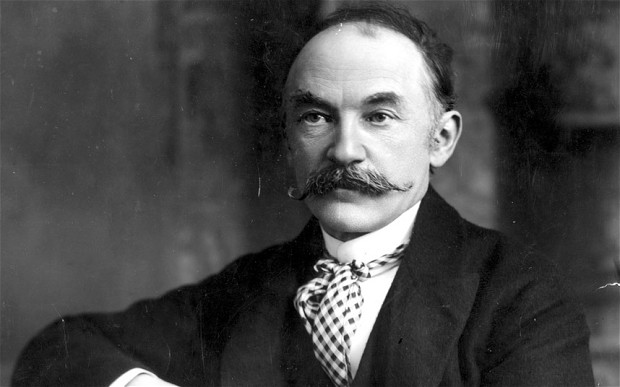 Thomas Hardy was a 19th century novelist who led a relatively uneventful life and produced 14 novels, 40 short stories, 900 poems and 2 plays. He lived almost his whole life in a small area around the Dorset town of Dorchester and set all his novels in that area. His works caused some outrage for their outspoken depiction of ordinary lives.

A Short Biography of Thomas Hardy

“Kiss me, Hardy!” legend tells us, were the dying words of Horatio Nelson at the Battle of Trafalgar in 1805. Sir Thomas Masterman Hardy was Nelson’s aide and close friend, who died himself in 1839. A year later his cousin, Thomas Hardy, was born on the 2nd of June, 1840, in the small village of Bockhampton, a little west of Dorchester, the county capital of Dorset.

The Hardy family had noble roots on the Isle of Jersey, going back to the 15th century, but by the time young Thomas was born the family fortunes had fallen. His father, another Thomas, was a respectable local builder and stone-mason and although his mother came from a poor family and had been a maid and cook, she was self-educated, loved to read and taught Thomas to read and write before he was four. In this close-knit rural community she knew many local stories and histories which she taught her son. When not working his father was a keen violinist and chorister, so between his two parents Thomas had a strong literary and artistic upbringing for such humble beginnings.

He at first attended the local school run by the Church of England, but when he was ten his mother transferred him to the rival system of the time, the so-called ‘British’ not attached to the Church of England. Hardy remained there until he was 16. He was a ‘bookish’ child we preferred solitude and his books and he became very proficient in Greek, Latin and French. He read mostly romances, such as the novels of Sir Walter Scott and Alexander Dumas.

Since his family was poor, further education at a University was out of the question for Hardy, so like many other children of those times, he was apprenticed to learn a trade. In 1856 he went to work in Dorchester for a local architect who specialized in church restoration, John Hicks. He spent four years with Hicks, during which time he travelled extensively in the surrounding area, learning more of the local towns and unconsciously collecting material that would later re-appear in his works. He also met a local schoolteacher and poet called William Barnes, who is believed to have been the inspiration for Hardy to become a writer.

Like many a boy with his head in a book, Hardy was unsuccessful at courtship and after rejection by what seems to have been at least his third frustrated attempt at romance, he set out for London to perhaps make a fresh start. He became assistant architect to Arthur Blomfield, another church restorer and had a successful if brief career. He won prizes from both the Royal Institute of British Architects and the Architectural Association and worked on several projects with Blomfield.

London was a revelation for Hardy. He attended a lecture by Charles Dickens as well as plays and operas at London’s famous theatres. He visited museums and art galleries. He was influenced by important writers of the time, from John Stuart Mills to Charles Darwin and John Ruskin and he abandoned the established Church. He also developed an interest in poetry, reading Swinburne and Browning but his own efforts were rejected for publication. His first published work seems to have been a short humorous piece called How I Built Myself a House, which was published in 1865 and won Hardy a prize.

Although he earnestly studied literary technique he seems to have remained an outsider in London society and after five years there and no literary career in sight he returned to Dorchester in 1867 and resumed working for John Hicks. Back home his love-life took a turn for the better and although himself by now 28, he developed a passionate relationship with a sixteen-year-old cousin, Tryphena Sparks. Relationships with cousins have always been perfectly acceptable in English society and the age difference was by no means unusual for the period. Hardy also began a novel, strongly influenced by the psychological style of George Meredith, who was exploring the emotions of his characters and using his own life for inspiration. Hardy’s first novel was called The Poor Man and the Lady, a reflection of Hardy’s own struggles with social class and his sense of loss in the decline of his family fortunes.

He submitted the novel to the publishing company Macmillan, who rejected it but urged him to continue writing. He did, and eventually had several of his early novels published in serial form, rather in the manner of Dickens’ works. His fourth novel, Far from the Madding Crowd, published in 1874, finally brought him recognition and some financial success and was followed in 1878 by The Return of the Native, another success.

His career now more assured and his fortunes looking up, in 1874 Hardy married Emma Lavinia Gifford, the daughter-in-law of the rector of a church in Cornwall Hardy had been restoring and who had become an important encouragement of his writing. In 1885, now successful in every way, Hardy designed and had built a villa house he called Max Gate outside Dorchester, where Hardy would spend the rest of his life.

Following the publication of his last two (and greatest) novels, Tess of the d’Urbervilles in 1891 and Jude the Obscure in 1895, there was a public outcry about their ‘immoral’ plots, a view apparently also shared by his wife. Shocked and hurt Hardy announced his withdrawal from novel writing and returned to his first love, poetry. His career as a poet proved as successful as his career as a novelist and his Napoleonic epic The Dynasts proved a great success. He received honorary degrees from Cambridge and the University of Aberdeen, the Order of Merit from King George V and a gold medal from the Royal Society of Literature.

In 1912 Emma suddenly died and although the marriage had long before become unhappy, Hardy was struck with grief. However his grief seems to have been short-lived, for in 1914 he married his niece, Florence Dugdale, almost 40 years his junior. One of the causes of his estrangement from Emma had been his interest in young literary women and Florence was also of that type. However his introverted habits and solitude in his study seem to have quickly soured things for Florence. She did however help him with his autobiography, which was completed shortly before his death. He also gave away or sold most of his manuscripts and destroyed many of his papers.

Max Gate became a place of pilgrimage for younger writers and Hardy continued to have an active involvement in literary society although rarely leaving his home. He even managed one last infatuation with a young actress when he was eighty. Becoming more reclusive and now staying entirely at Max Gate, Hardy died on the 11th of January, 1928, at the age of eighty-seven.

The middle of the 19th century was a time of great social upheaval in England, with the traditional rural society being displaced by industrialization and with many rural people migrating to the cities to work in factories. Hardy felt a great love of the old ways which was always reflected in his writing, so when it comes to depictions of life in 19th century England, few if any writers can rival Thomas Hardy in capturing the real sense of what it was like to live at those times.

He writes about the lives of ordinary people and his detailed descriptions, realistic characters and moving plots still speak to us today of the human condition and the courage of existence. Unlike some other writers, Hardy led a relatively quiet, introverted life but he had a rich internal one that produced some of the greatest novels in the English language.

Hardy was buried twice. His body was cremated and his ashes interned at Poet’s Corner, Westminster Abbey, in an official funeral. At the same time his heart was buried next to Emma, in the churchyard of Stinsford Parish Church, Dorchester, where his father and grandfather had both sung in the choir.

There is a statue of Hardy in Dorchester, Dorset.

His childhood home in the cottage where he also wrote his first novels is a National Trust property, in the village of Higher Bockhampton, outside Dorchester.

His home, Max Gate, Dorchester, is also a National Trust property. Unfortunately the house contains very few artifacts directly related to Hardy as his possessions were dispersed before and immediately after his death. However his dog, Wessex*, has a headstone in the Pet’s Cemetery on the grounds of the house.

*Wessex was the Anglo-Saxon name for the part of England that Dorchester is in and was the fictional name for the area that he used in all his novels.

Almost all Hardy’s works are still in print and they can also be accessed on-line.

Biographies of Hardy include: