You are here: Home / British History / The Monarchs: William the Conqueror (1066 – 1087) – The King Who Invaded England and Forged a New Nation 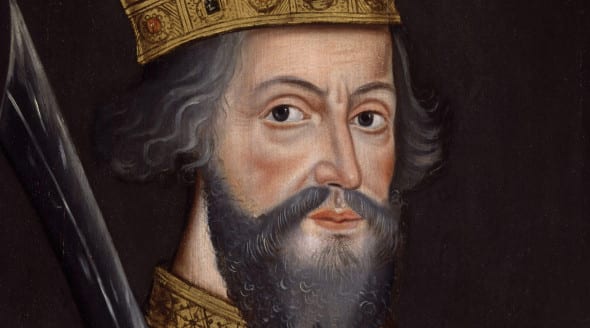 The Battle of Hastings in 1066 was the swiftest, most effective and most brutal military occupation ever seen and is believed by many to have been the most important battle in English history. Leading the victorious Norman invaders was William, a Norman duke known after 1066 as William the Conqueror, King of England. William completely transformed England, transferring all land from English freemen and Saxon-Danish nobility to his Norman followers, suppressing revolts by massacring entire villages and recording the new lay of the land for the benefit of generations to come in his famous Domesday Book.

Key Facts about William the Conqueror

A Brief Sketch of William the Conqueror

William the Conqueror was bred for battle at a young age. His father, Robert the Devil Duke of Normandy and his mother Herleva, daughter of a burgher of Falaise known as William the Tanner, were not married. Herleva was married off to a Norman baron against her will but maintained a romantic relationship with Robert the Devil throughout his short life. When Robert died in 1035 William was just 8 years old. Despite the fact that his mother was married to another man, William was Robert’s only son and thus became the Duke of Normandy.

Over the succeeding twenty years William protected his Dukedom against the King of France, who continually plotted to invade Normandy and assassinate William, and against English rebels whose aim was to create anarchy in his duchy. Throughout William’s childhood and adolescence Norman nobles fought each other for power, with the battle lines often drawn between those in support of William and those against him. It is thought that up to four of William’s custodians were killed during the early years of his dukedom. In 1047 William was victorious in quashing a Norman rebellion with the support of King Henry of England but the years between 1045 and 1060 were relentlessly bloody and chaotic.

In the early 1050s William married Matilda of Flanders in a union said to be forbidden by Pope Leo IX. Papal sanction was eventually secured a few years later with the founding of two monasteries in Caen. William’s marriage to Matilda secured his position and gave him important allies, as Flanders was a powerful French territory with links to the French monarchy and German emperors. William arranged for his allies to hold powerful positions in the Norman church and in later years took control of neighbouring territory Maine.

William the Conqueror was second cousin of King Edward the Confessor of England (William’s father was the nephew of Edward’s mother) and during the late 1050s, with no natural heir from King Edward, William became a real contender for the English throne. William claimed that Edward had already promised the throne to him but on his deathbed in 1066, Edward named English earl Harold Godwinson his successor.

By the time William invaded England in 1066 he had the support of the wealthiest barons and knights in Flanders and Brittany and had amassed a huge army and fleet of invasion barges. On the 14th October 1066 the Battle of Hastings began and lasted for one day, Harold’s army of foot soldiers and archers offering a worthy opponent to William’s army of cavalry. The decisive moment in the battle came with the death of Harold who fell with arrow wounds to his head. King Harold’s mother, Gytha, is said to have offered William the weight of her son’s body in gold if she could have it in order to perform a proper burial. William refused and promised instead to throw Harold’s body into the sea. Later, it was claimed Harold’s body was buried at Waltham Abbey.

William was crowned King of England at Westminster Abbey on Christmas Day 1066 and immediately set about the tremendous transformation of the English nation. As England’s first total conqueror William united the country in complete subjugation. The predominantly Saxon-Danish English nobility who earned the majority of land in England were either killed at Hastings or completely expropriated by the new king. Three-quarters of the whole territory of England was shared out amongst around 5000 of William’s followers and speculators from Brittany and Flanders, with the last quarter staying in the possession of the King. William’s newly created magnates were required to contribute knights towards his army as well as to defend local garrisons. This new feudal system structure meant that William was able to successfully crush every rebellion against his rule including Welsh and Danish attacks.

William used the lawlessness of constant but uncoordinated rebellions to justify the terrifying massacre and brutal suppression of any area that challenged his rule and many that didn’t. William ordered the building of many new castles, keeps and mottes and used these new fortifications as bases of aggression from which his armies could occupy the English countryside and retreat to safety when threatened. The central keep of the Tower of London was built high, outside the city walls in order to ensure domination of any would-be invaders.

During William’s reign royal power was at its peak. Observing the old, established Saxon laws, William set up ecclesiastical courts to settle marital and spiritual matters, banishing bishops from the shire court and administering ‘King’s Justice’. William also introduced a clerical bureaucracy separate from the church that was answerable only to him.

In 1085 William ordered the compilation of the Domesday Book. His scribes undertook a survey on a tremendous scale, recording the landholdings held by himself and his vassals throughout the entire country. Each listing records the holding, its owner, who owned it before the Conquest and its value. The manuscript is still in existence, held at the National Archives in Kew, London and offers a unique insight into land ownership, taxation and way of life in Medieval England.

William the Conqueror was a brutal king who reduced many English villages to desolate graveyards during his rule. However the ‘revolt of the earls’ of 1075 led to an invasion by The Danish King’s brother Cnut and saw William suffer his first defeat at the Castle Dol in Brittany. A rebellion led by William’s oldest son Robert, in 1077 and 1078, saw Normandy raided and William nearly killed in battle. In 1079 King Malcolm of Scots raided the River Tweed and William’s slow response led the Northumbrians to rebel against the Bishop of Durham and Earl of Northumbria.

William also fought in rebellions on the continent in the early 1080s. William’s son Robert again rebelled, this time with support from the French king. In 1083 William’s wife Matilda died and just four years later William joined her. In July 1087, William was fighting in an expedition against the French Vexin, a clash instigated by his son Robert, and was taken ill. It’s unclear what illness he succumbed to or what injuries he sustained but after being taken to the priory of Saint Gervase at Rouen, William died on 9th September 1087.

William was buried at the abbeye-aux-hommes but his tomb has been disturbed many times. As promised, Normandy was bequeathed to William’s eldest son Robert while custody of England was given to his second son William. A decision that would inevitably lead to more war.

Legacy of William the Conqueror

The consequences of William the Conqueror’s reign as king of England are complex and long-lasting. Immediately following William’s death his sons Robert and William went to war over control of England and Normandy and the battles continued for many years leading to the revolt of Maine and a resurgence of aristocratic power in Normandy. In England, William the Conqueror changed the church and aristocracy, influenced the English language and altered the way land was owned and taxed forever. William created a fusion of English and Norman systems of power to create a new kingdom that lasted well into the Middle Ages. England’s ties with Scandinavia were severed and her ties with France were tightened, an alliance that has lasted to present day.

William the Conqueror instigated the writing of the Domesday Book, the oldest statistical survey of life in England ever created.

Locations Related to William the Conqueror