15 June 1215 was when the barons of England got together and forced King John to sign the Magna Carta. The Magna Carta is known as the first charter to limit the power of the monarchy and to uphold the rights of the individual going on to form the foundations of democracy as we know it today.

800 years on, Lincoln has one of the four surviving copies of this document, and the city had a weekend of celebrations for the anniversary including storytelling, festivals, and a real party atmosphere. I can’t say no to a good party so I took my 9 year old daughter to Lincoln for the weekend to join in.

Lincoln is also the only place in the world where you can find an original copy of the Magna Carta together with the Charter of the Forest, issued in 1217 to amplify the document and one of only two surviving copies. The two charters are housed in Lincoln Castle, a seat for justice from its beginnings.

Virgin Trains East Coast were able to run some direct trains from London to Lincoln for this special weekend which made travel super easy. (You usually have to change at Newark North Gate station for an East Midlands train to Lincoln.)

From the moment we arrived the fun started as were greeted off the train by a huge King John puppet – at least 12 ft high! – and puppeteer wolves too. 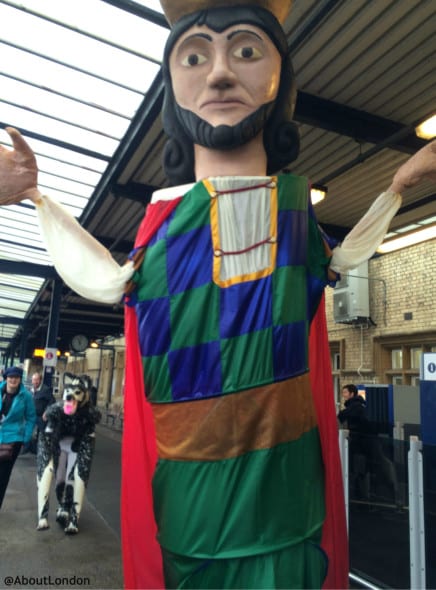 I visited Lincoln Castle last year before the £22 million redevelopment was complete and I thought it was good then but, my word, it’s great now!

There is 1,000 years of history here and I really enjoyed the Medieval Wall Walk where you can walk all the way around the castle perimeter along the high walkway so we had some amazing views of the city. There’s a new audio guide too and we learned facts while exploring. I almost resisted climbing up in The Observatory Tower but my daughter’s cries of what she could see had me dashing up to enjoy the sights too. 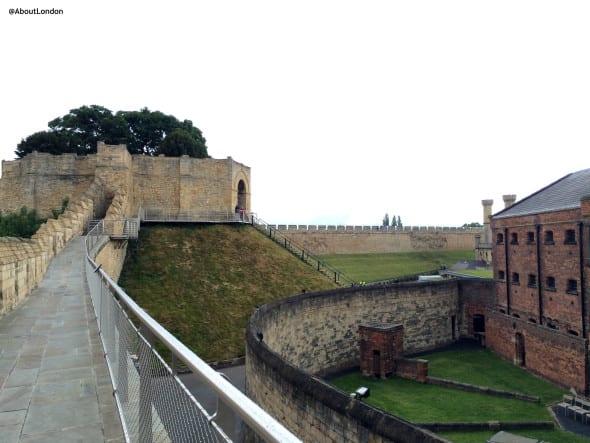 Another newly opened area is the Victorian Prison where you can visit the cells and find out the stories behind the walls. There are touchscreen tables and specially commissioned films to bring the tales to life.

And, of course, there’s the new gallery built to house Lincoln’s copy of the Magna Carta. It’s a surprisingly small document with very neat Latin handwriting.

All of this would have been enough but as this was the Great Magna Carta Weekend there was a large stage set up in the castle grounds for a spectacular show by Diversity on Saturday night and Horrible Histories Barmy Britain on Sunday.

It would be wrong to not visit the second largest Gothic cathedral in England. While exploring Lincoln Cathedral you have to try and spot the Lincoln Imp in the Angel Choir (St Hugh’s Choir). The legend says he was playing in the cathedral and angels turned him stone. He can be hard to find but there is a light (that can be activated by a 20p coin) to help. We put a coin in and then everyone in the choir pointed as they had been searching without any luck until then. 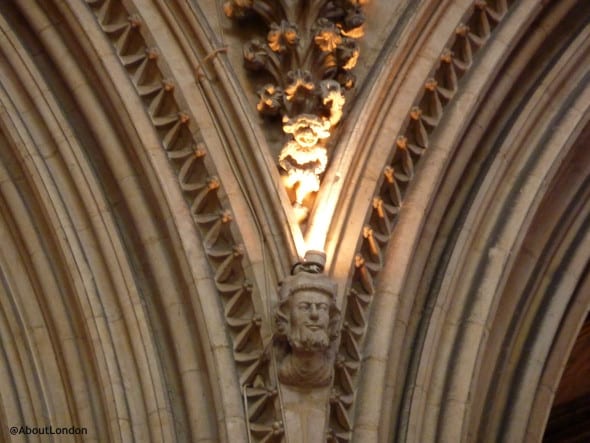 To bring the history and impact of Magna Carta alive, six storytellers were performing over the weekend. We saw a story that included a bird of prey so a real falcon was there too. 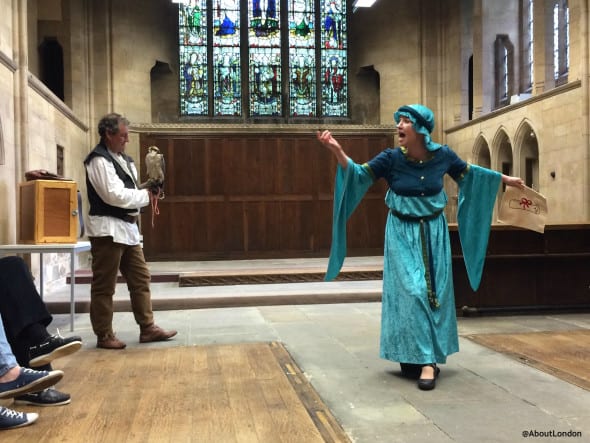 We also stayed for a debate afterwards to get thinking about rules and laws.

A wonderful addition to the city were the 25 painted barons that arrived at the weekend. We grabbed a booklet with a map to find the hidden letter on each baron to complete a sentence and claim some of King John’s gold (chocolate coins).

The barons are staying for three months before being auctioned to raise funds for charity. 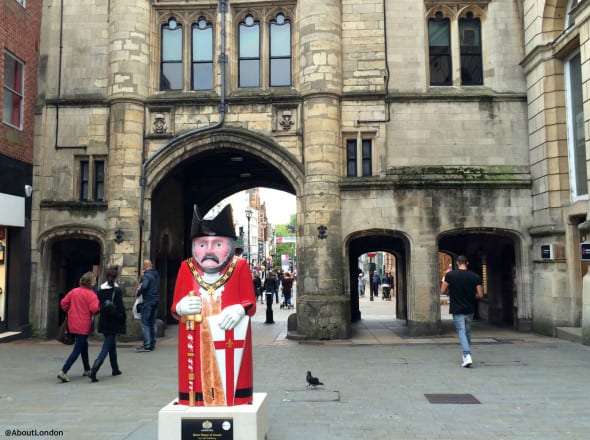 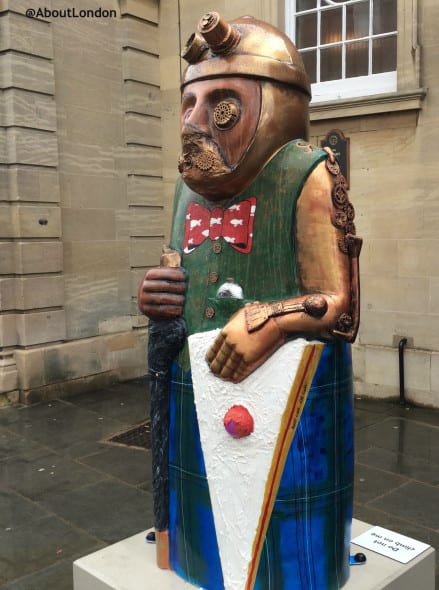 Just as we were walking to the train station to return to London we met this amazing carnival who were dancing down the High Street and interacting with the audience. They popped into shops and got everyone out dancing which really made my day. 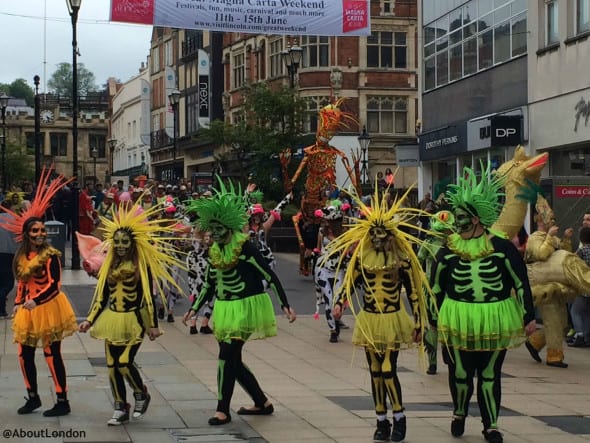 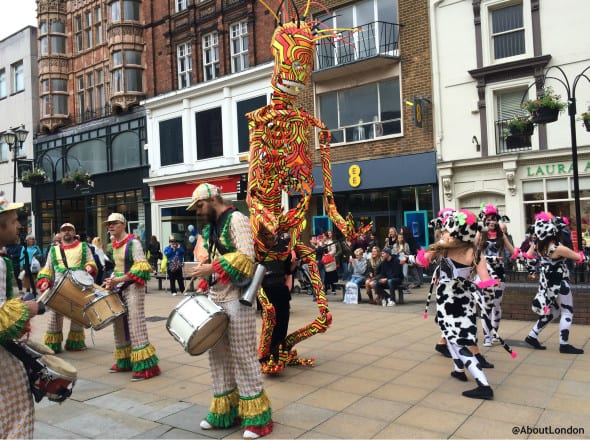 You can see a short video clip of the fun here.

More Reasons to Come to Lincoln

So if you’re thinking, ‘that’s nice, she had a good weekend and I missed it so no point going to Lincoln now’ you would be wrong as Lincoln has lots of events for 2015.

The Lincolnshire Show is on 24-25 June and has animals, food and children’s fun – everything you would hope for from a county show.

25-28 June is the Lincoln Grand Prix and National Cycling Championships. I can hardly walk up Steep Hill so I’ve no idea how they cycle up it!

26 June to 27 September is Lincolnshire’s Great Exhibition to celebrate 800 years of the Magna Carta. There are lots of venues involved so this is worth returning for.

As I mentioned earlier, Lincoln’s Steampunk Festival is world famous and it’s a real treat to see the neo-Victorian costumes.

October has the Frequency Festival, Comedy Festival and Sausage Festival. And I expect you already know about the wonderful Lincoln Christmas Market which is the biggest in Europe.

As Burton Road Chippy is the 2015 winner of the Best Independent Fish & Chips Restaurant we had to go there for lunch. Sadly, I have no photos to show you of our meals but that’s because we didn’t pause before eating as it was all so good! 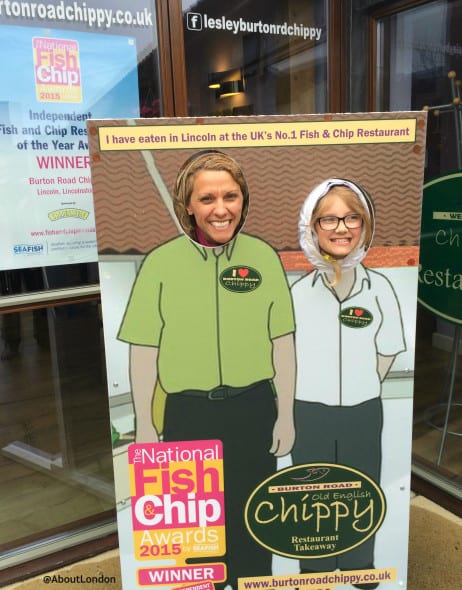 The restaurant (and take-away) is near to the Museum of Lincolnshire Life (free entry) and the Tour Lincoln Hop-On-Hop-Off City Sightseeing Bus (kids go free) stops nearby.

If you’re looking for afternoon tea, Lincoln has lots of tea rooms but The Bishops Old Palace is the place with the best views.

If you want to stop on Steep Hill – and, quite frankly, that’s a good idea as it is steep! – I can recommend Bunty’s Tea Room for their lovely homemade cakes and The Book Stop Cafe where you can read books by local authors while enjoying lunch (and they do sell books too).

We stayed at The Lincoln Hotel which is just behind the cathedral so has amazing views from the restaurant. Our room at the back of the hotel was very quiet and opened onto a private garden.

I’m grateful to Visit Lincoln for helping me plan my itinerary and to Virgin Trains East Coast for the travel tickets to enjoy the special direct service.