This famous scare attraction had been on Tooley Street in London Bridge for nearly 40 years but closed at the end of January 2013 to move to its new home on the Southbank.

From Friday 1 March 2013, The London Dungeon is at County Hall, right next door to the London Aquarium and by the London Eye, which makes sense when you know these three major attractions are all operated by Merlin Entertainments.

They haven’t simply closed at one location and reopened exactly the same on the new site as over 300 props were sold at a Carnage Car Boot Sale in February (raising nearly £3,000 for charity) and the Southbank venue has undergone a £20 million transformation. 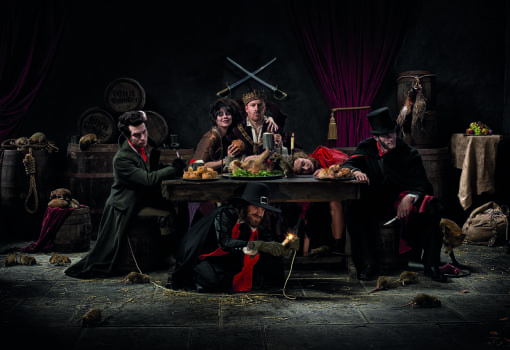 The new venue is a third bigger and is spread over three floors. I went to a preview event this week to try the all new London Dungeon and can report that the basic format of moving through in groups of about 20 people and meeting different characters from 1,000 years of London history is as before but the way it’s all presented is greatly improved. A visit takes around 90 minutes and you’ll laugh and scream at the theatre, special effects and rides.

Firstly, you need to be aware it’s really dark inside. As you wait in line in the Corridor of Misdemeanours there are live cockroaches you need to walk pass – 11 giant cockroaches to be precise – and more active, and possibly more worrying for many, there are also 38 live rats. There’s even a glass dome where you can pop your head inside one of the rat enclosures. The Black Jester will dance around to entertain and the atmospheric sounds get you prepared for what’s ahead.

But do remember there is no real danger here. It’s all about scaring us in a safe environment, and it’s really good fun. There have been script writers and comedy consultants involved to get double entendres in place to make the grownups giggle such as the talk of Little Willy and Big Dick. 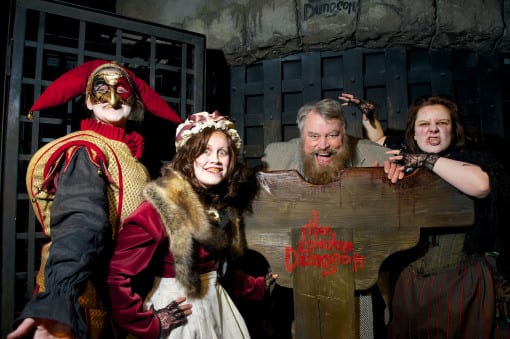 Once you’ve get through the dark corridor you start your journey in a lift down to the first ride. There are two rides incorporated into the route and both were at the old London Dungeon just with different names.

Henry’s Wrath is the name of the boat ride which needed 20,000 litres of recycled water from the River Thames to be brought inside. Look out for Henry VIII with the face of actor Brian Blessed projected on but sadly you pass it within seconds which was disappointing as he is being used in a lot of the attraction’s promotions.

The ride itself seems very tame and then you stop. The boat goes up. And then it gets more exciting! I won’t give the game away too much but you may want to pull your coat over your head for the splash.

As you get off the boat you meet a Gong Farmer – the name for a medieval poo collector. He calls down from the city gates and tells toilet tales but you may miss some of his spiel depending on the order of the boats as you have to wait for the entire group to arrive.

Guy Fawkes is a new character, although a very well-known one in England, and you learn about his failed plot to blow up the Houses of Parliament in 1605. There’s an actor interacting with the projected face of Guy Fawkes so you can’t interrupt but you will hear about a lot of torture.

Speaking of torture, the next room is the Torture Chamber. Volunteers are taken from the audience and the torturer explains the tools of his trade.

It’s more projected faces, this time on plague victims in coffins telling us what happened before you visit the Plague Doctor whose realistic cadaver in the surgeon’s operating theatre cost over £10,000. Sit still as there are some surprises in store. 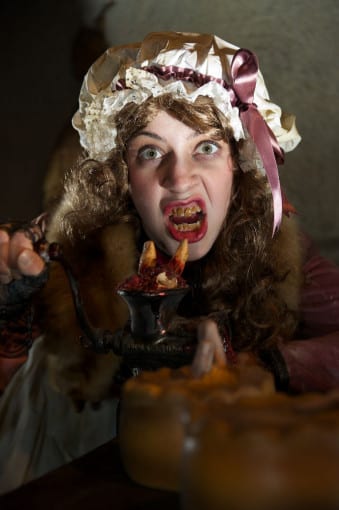 Next you get to visit Mrs Lovett’s pie shop and hear about her secret ingredients before meeting her meat supplier, Sweeney Todd, and taking a seat in his barber’s shop. Again, sit still as there are some surprises in the dark.

No tale of London’s gruesome history would be complete without the Jack the Ripper murders in Whitechapel, east London. Meet Mary Jane Kelly before she became the fifth and final victim and then find your way through the mirror maze knowing there’s a killer on the loose. Finally, seek sanctuary in the Ten Bells pub while Peggy Waldron, the landlady, tells spooky tales. I have to admit this is the section that had most of us talking afterwards as the landlady has superb comedy timing in the dark and then when we saw the ghost of Jack the Ripper we were truly terrified! 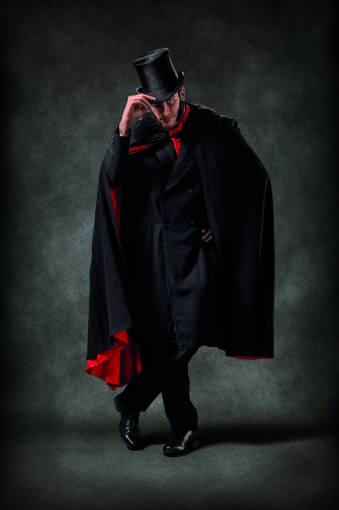 Thankfully there’s some more humour to follow after that fright as you enter a courtroom and some of the group have to stand trial for some hilarious crimes.

The journey ends with another ride, the Drop Ride to Doom. You literally plummet down three storeys and scream at the top of your voice! If you really don’t want to do this there is an ‘escape to freedom’ – yes, that does mean the exit.

There are souvenir photos to buy and a large well-stocked shop for gifts. The toilets have more spooky sounds and voices so don’t visit alone.

I did wonder if they had imported the ‘dank basement’ smell and it turns out they have with 26 different scents including ‘rotten food’ and ‘dirty Thames water’. There are also dripping ceilings to walk under so expect to get a bit wet, and the floors are ‘cobbled’ so flat shoes would be best. The whole journey takes around 90 minutes.

I wouldn’t bring younger children here and would aim for ten years and older, if possible. Teenagers will love being frightened by the actors jumping out and families will have fun together. Sure, it’s light on historical accuracy but it’s not a museum and it is really good fun.

Key Info about The London Dungeon

Time: Open from 10am each day except on Thursdays, when King Henry sleeps in until 11am.

Costs: From £18 for adults and £13 for under 15 year olds. The best prices are for online booking in advance.

Getting there: The London Dungeon is next to the London Aquarium and right by the London Eye. The nearest tube station is Waterloo.
Address: County Hall, Westminster Bridge Road, London SE1 7PB.